Private Practice’s troubled doctor Amelia is having a baby, and so is actress Caterina Scorsone! This mom-to-be won’t be carefully hiding her bump on set thanks to her character’s simultaneous pregnancy. 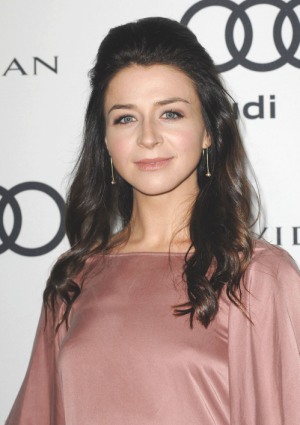 Caterina Scorsone and her Private Practice character Amelia are both going to become mothers soon! The actress has announced she is expecting a baby with husband Rob Giles on the same day fans will learn more about Dr. Amelia Shepherd’s fictional pregnancy.

“We’re over the moon,” Caterina Scorsone said of her real life baby news. “I’m starting to show now. Everybody on set has been pretty sweet and is offering me fruit.”

Speaking of her Private Practice character the 30-year-old told People, “This year Amelia — who had been sober — fell off the wagon after her friend died. She hit rock bottom, had an intervention and went to rehab. So this news is on the heels of that.”

Once news of Scorsone’s pregnancy got to show creator Shonda Rhimes it wasn’t long before a bun was written into Amelia’s oven.

“The news came out of left field and I think she decided she could use this for dramatic purposes,” joked the star. “As an actress it never feels like right time. But once we knew what was happening we were like, ‘This is perfect.'”

“Shonda was immediately excited and talked about what we could do when the baby came so [he or she] could be on set,” she continued. “She’s been unbelievably supportive.”

While congratulations are in order for Caterina Scorsone, one big question remains for the Private Practice writers: Who is the father of Dr. Amelia Shepherd’s baby? So far all fans have seen are previews that drop the baby bomb with Amelia telling Sheldon, “I’m pregnant.”

Which Private Practice character do you think is the father of Amelia’s baby?