Chris Brown is wanted by the cops again — an arrest warrant is being issued for the singer today. What did he do this time? 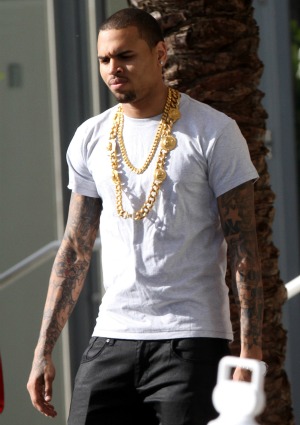 The answer to keeping Chris Brown away from Rihanna might be in the bag. An arrest warrant for the “Look at Me Now” singer will be issued today after a woman accused him of theft.

Christal Spann has accused Brown of stealing her iPhone after she snapped a picture of him leaving a Miami club last night. Spann told cops that Brown snatched the phone out of her hands through his car window, saying, “B***h, you’re not gonna put that on the internet.”

The public information officer for the Miami Police Department confirmed that an arrest warrant will be issued to get Brown into custody.

“An incident report was filed against Mr. Brown, and the Florida State Attorney’s Office will be issuing a warrant for his arrest this afternoon, I can’t tell you what time, but it will be today,” Deborah Doty told RadarOnline.

Shock! Chris Brown didn’t beat up Rihanna at her party >>

This is extremely bad news for Brown. He is currently still on probation for beating the crap out of Rihanna three years ago, and this could certainly be viewed as violating the terms of that probation — meaning Brown could be facing real jail time.

If that happens, it could be enough to finally put an end to renewing his relationship with Rihanna.

Neither Brown nor his legal team have commented yet.