Sometimes it’s hard to pick which book to read next. When I’m undecided, I like to skim the opening pages of a handful of likely titles to see which one calls to me. Here are five books I have on my March reading list. Based on these quotes, which one would you read first?

The Nobodies Album
by Carolyn Parkhurst 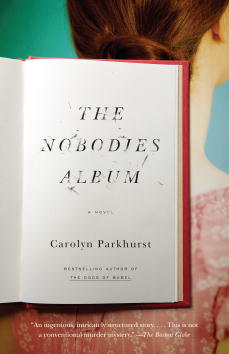 There are some stories no one wants to hear. Some stories, once told, won’t let you go so easily. I’m not talking about the tedious, the pointless, the disgusting: the bugs in your bag of flour, your hour on the phone with the insurance people, the unexplained blood in your urine. I’m talking about narratives of tragedy and pathos so painful, so compelling, that they seem to catch inside you on a tiny hook you didn’t even know you’d hung. You wish for a way to pull the story back out; you grow resentful of the very breath that pushed those words into the air. Stories like this have become a specialty of mine. (Page 1)

Just as best-selling author Octavia Frost is finishing up her latest manuscript (consisting of reworked endings to her previous novels), she learns that her rock star son, Milo, has been accused of murdering his girlfriend. Although they’ve been estranged for several years, Octavia heads out to San Francisco to see if she can help her boy. While figuring out what happened to Milo and his girlfriend, Octavia begins to piece together events, as if they were clues in a murder mystery. The Nobodies Album is a complex, compelling and sometimes funny novel within a novel, that reveals the troubled history of the Frost family layer by tantalizing layer. 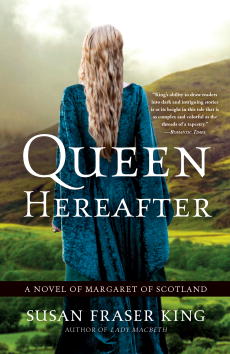 They rode away from the sweeping gray sea toward mist-covered hills and forestland, and soon Margaret could see round-shouldered mountains far away, layers of blue and green shapes fading into the distance. The escort followed an earthen track as they passed isolated cottages set on steep hillsides where sheep grazed; one cluster of homes, Ranald mac Niall explained, was a clachan, the native word for village. Here and there she saw tall stone crosses on the peaks of a few hills, handsomely carved monuments combining a cross with a circle, large enough to be easily seen across hill and gleann, as she learned the valleys were termed.

Finally the escort entered the shadowed coolness of a woodland, the track thick with pine needles crushed to invigorating fragrance by horse hooves and cart wheels. A wide stream flowed beside the path with small waterfalls rushing over boulders. (Page 33)

Early in 11th-century Scotland, Margaret, a Saxon princess who wants only to be a nun, reluctantly marries the Scots warrior-king Malcolm to further her brother’s political aims. Queen Hereafter is a thoroughly researched and vividly told account of Margaret’s growth from an insecure young woman to a powerful and self-assured queen. This is a must-read novel for historical-fiction fans who are interested in Scotland.

How to Eat a Cupcake
by Meg Donohue 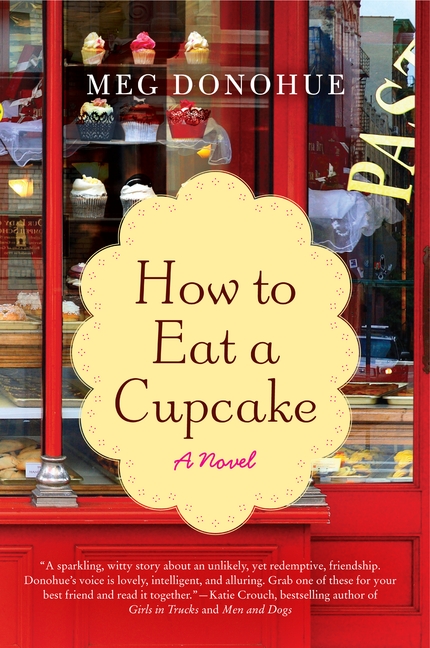 People frequently make the assumption that I’m unreliable. I chalk this up to the fact that I’m perhaps a bit too creative and flour-flecked in my dress and I’m not a hedge fund manager, dot-com entrepreneur, or lawyer. Oh, and my hair is curly, which I guess pegs me as unpredictable. Hair, apparently is the new window to the soul. (Page 3)

Annie Quintana and Julia St. Clair have an American upstairs–downstairs relationship. Annie, the daughter of the St. Clairs’ housekeeper, and Julia were childhood best friends until their bonds were seemingly torn apart forever by teenage cruelty. When their paths cross almost a decade later, the two agree to mend fences and go into business together. Unfortunately, their plans are threatened by acts of vandalism and shadows of the past, and the pair must stand united to save their business and rekindled friendship. How to Eat a Cupcake is a fun mix of women’s fiction and mystery/thriller, with a dash of romance.

The Revisionists
by Thomas Mullen 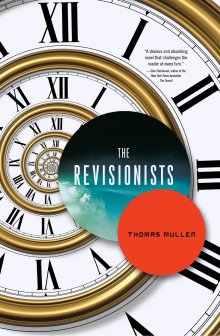 A trio of bulbous black SUVs passes sleekly by, gliding through their world like seals. The city shines liquidly off their tinted windows, the yellow lights from the towers and the white lights from the street and the red lights they ignore as they cruise through the intersection with a honk and a flash of their own beams. People on the sidewalk barely give them a glance…

It’s just past ten and my mark is on the move. He has an important date — a date with history, in fact, though he isn’t thinking of it that way. He’s meeting his source, the mysterious individual who has provided him with glimpses of a golden but dangerous truth, a mythic grail whose existence he was beginning to doubt. The source has promised him the grail, tonight. But only if they meet in person. (Page 3)

What if our future were utopian instead of dystopian? How could we guarantee that the path of history will lead to a true time of peace, plenty and pleasure? We would hire hit men like Zed to travel back in time and make sure other time travelers leave the past alone. The Revisionists presents the intriguing idea that the only way to eventual world peace is to let history unfold just as it has and is. But when technology makes it possible for the power-hungry to change the past to serve their own needs, it’s left to agents like Zed to thwart them without leaving a historic trail. Fans of thrillers, utopian/dystopian fiction and alternate histories will find a lot to love in this novel.

Far from Here
by Nicole Baart 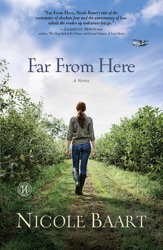 Three years before Etsell left for Alaska and disappeared off the face of the earth, I bought an empty store on the cobblestoned main drag in Blackhawk and set up my own salon. It was a narrow little building that no one else wanted, almost exactly the same length and width as a one-car alley. I wondered, as I stood with the real estate agent in the dank interior of my new shop, if indeed the space had once been a grassy, graveled byway, the sort of place where the butcher from the deli next door would have leaned his bike up against the cool bricks on a warm summer day.

The thought that volunteer lily of the valley may once have graced the shadows where my future salon now stood cheered me considerably, and made me overlook the low-hung ceilings and water-stained hardwood floors. It helped that the afternoon sun was bathing the unused space in the kind of charmed light that seemed laced with fairy dust and magic. I stood in the middle of a patch of honeyed sun and took one slow turn to survey every square inch of the space I already knew would be mine. (Page 53)

Danica, a hairdresser, is happily married to Etsell, a pilot and flight instructor, even though she is terrified to travel by plane. When Etsell decides to pursue his passion to fly for a few weeks in Alaska, Danica understands. It’s only after Etsell’s plane goes missing that Danica begins to wonder how well she knew her husband. Lost in limbo between widowhood and hope, she turns to a pastor, who just happens to be both a neighbor and single, for comfort. Far from Here is a tale of marriage, hope and new beginnings.