When happily married New Yorkers Paul Rudd and Jennifer Aniston find themselves at a hippy commune, you’ll be laughing — and squirming — in your seat! Producer Judd Apatow (Knocked Up, The 40-Year-Old Virgin) knocks it out of the ‘Elysian Field’ in this hilarious R-rated comedy. 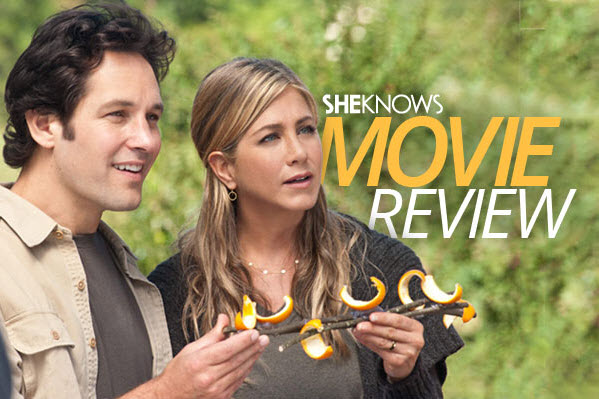 Ejected from the Manhattan rat-race, George and Linda, played by Paul Rudd and Jennifer Aniston, find themselves dumping their recently purchased “micro-loft,” piling their belongings into their subcompact and heading to George’s brother’s house in Atlanta with the hopes of getting back on their feet. On the way, however, they stop for the night at a bed and breakfast called “Elysium.” When they are greeted by a nudist whose very full Monty is on display, it’s clear this is isn’t your grandma’s B&B. In fact, Elysium is a land where free-love, awkward sharing sessions and bizarre birthing practices are de rigueur. George has a great time loosening up by smoking peyote and blowing a didgeridoo, but Linda is freaked out by the bawdy bohemians and is eager to get the heck out of there.

But life at George’s brother’s house makes Elysium look like Disneyland. Ken Marino, who co-wrote the script, plays big brother Rick, who’s married to Marissa, a hilarious Michaela Watkins. Rick gets George a job at his port-a-potty business while Linda follows Marissa’s lead and takes up drinking full-time. The kitchen is even equipped with a margarita machine, making for easy access once the morning mimosas are depleted. But all the tequila and excrement in Atlanta can’t placate George and Linda when Rick begins berating his younger brother for being a loser. Quickly, George and Linda find themselves back at what now appears to be the most tranquil place on earth, Elysium.

In a surprise turn-around, uptight Linda begins to blossom at the hippy commune. But it doesn’t take long for George to see through Elysium’s gossamer facade, especially when alpha-male Seth preaches “free-love” to Linda. Played by Justin Theroux, Seth invokes the same level of wannabe Zen mastery as reality star Coach from recent seasons of Survivor. George must now battle against the pacifists to save his marriage.

Wanderlust is a non-stop giggle riot. Aniston and Theroux have great comedic chemistry and Rudd is the funniest I’ve ever seen him on film. The scene where Rudd is looking into the mirror while trying to psych himself up is hysterical. Also hilarious are the disparate, odd-ball inhabitants of Elysium who include the likes of comedy-veteran Alan Alda and sex-kitten Malin Akerman, making for a wonderfully wacky ensemble.

Bottom line: With Jennifer Aniston and Paul Rudd at their best, this R-rated comedy will have you laughing your socks (and maybe even your pants) off.