Dakota Fanning turns 18 today, believe it or not. Find out how the precocious young actress keeps a level head — and lives a normal life — in a stressful industry. 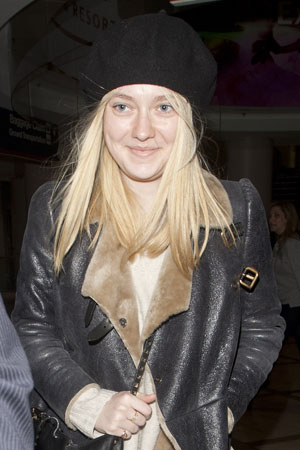 Happy birthday, Dakota Fanning! The prolific actress and Marc Jacobs’ muse is celebrating the big 1-8 today — a big birthday for normal kids, but she’s accomplished more in her 18 years than most people twice her age.

The actress — currently attending school at NYU and filming the upcoming movie Effie — is one of the good girls. Fanning managed to juggle high school and cheerleading with a life of movie-making. Now, she’s moved on to juggling college with her jet-set lifestyle.

“For the same reasons I wanted to go to a high school,” she told W magazine of the reason for going to college. “You hear people say, ‘Oh, when I was in high school’ or ‘When I was in college.’ That defines a lot of who people are, and I didn’t want to miss out on that.”

She’s not exactly having the typical college experience, though — she’s not living with roommates.

“No roommates… My mom is staying with me in my apartment for a little bit. She’s teaching me how to wash clothes and such. But I’m so excited to be on my own. In my house in L.A., we all feel that everything is everybody’s, and so doors are never really closed. My sister and I share a bathroom, and when you have a sibling, nothing is actually your own. I’ve never really had anything or any place that was just mine.”

The thing we love most about the Breaking Dawn actress is her ability to grow up in the public eye with ease — she’s never been caught stumbling outside a club like some of her peers. Maybe it’s because she has a down-to-earth view on life and fame?

“I’ve always felt that you should never forget that you’re just a person. Even though you’re not like everyone else, you are just like everyone else. For instance, I met someone the other day, and they said, ‘Hi, I’m so-and-so.’ I said, ‘Hi, I’m Dakota.’ And they’re like, ‘Yeah, I know.’ But I can’t lose the fact that I still need to introduce myself to people even though they might already know my name or who I am. Oh, yeah, I guess you already know my name, but I’m going to say it anyway.”

She’s also a typical big sister, according to Elle Fanning — though they don’t always get along.

“She is a nice older sister,” Elle said. “But it’s not like we always get along. Now that she’s going to college, it’s different. I went into her room at home in California, and all her clothes were gone! Her closet was empty! I don’t get to go in there and steal clothes anymore.”

Life is never fair, is it, Elle?