Octavia Spencer is getting ready for the Oscars this weekend, but she’s also thinking about her life after the awards. Find out what special gift she’s giving herself for working so hard. 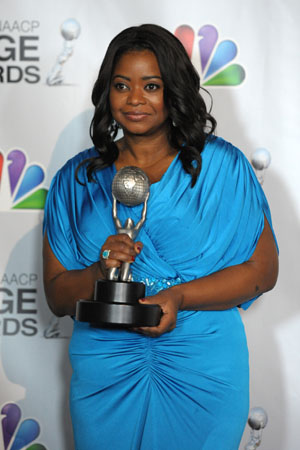 Actress Octavia Spencer is riding high this awards season, thanks to her role as mouthy maid Minny Jackson in The Help. The former production assistant hasn’t splurged yet to celebrate her award-winning role, but that’s about to change.

“I am going to get my boobs lifted,” she told Parade of her post-Oscar plans. The actress has joked that she’s going to show off her “saggy cleavage” at the show. “That’s going to be my first gift. I’m going to do that. I figured going into my 40s I want my boobs where they were when I was 17.”

The single 39-year-old won’t do it right away, though.

“Right after the Oscars I start a Diablo Cody movie,” she said. “We’re taping out of the country for four months, so I wouldn’t be back here until about August. So, I would want to do this around November. Then that way I could just relax until January.”

Sounds like a good plan to us! The actress also dished on her wishes for a family and children.

“I hope the guy I choose is not an only child,” Spencer said, adding that she’s the sixth of seven children. “But I do want kids. I definitely want at least three, but I’m about to hit 40, so we’ll see.”

“A little bit more, but it feels weird if it’s not coming from the right place,” she said. It sounds like men are coming out of the woodwork now that she’s famous.

Still, the on-screen maid said she still gets star-struck.

“I can’t say one experience is better than the other one but if I had to, I would say Steven Spielberg. I saw him quite a few times and he was always smiling. And I literally probably looked like a stalker. He and Oprah. They’re right there together. Oprah changed my dream of what I could be and Steven influenced every ounce of my artistry. I think he’s just the best ever. The fact that I got to do a movie for his studio and had conversations with him is like ‘Oh my God.'”

She hasn’t grown a big ego, though — her PA days cured her of that.

“I saw what people who are full of themselves are like — another reason not to lose your humility!”