Tricky, tricky: Ray J is revealing that Kim Kardashian cheated on her first husband and is a total freak in bed, all while not once using her name. Way to avoid a lawsuit! 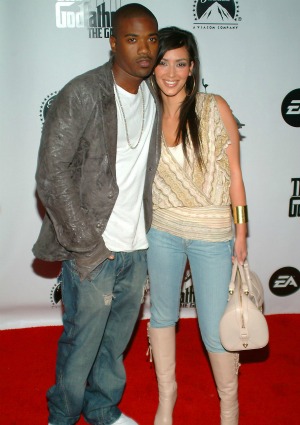 Ray J is getting over Whitney Houston’s death by rehashing old news with an ex. The reality star has a new book out in which he claims a woman who he obviously means to be Kim Kardashian is a cheating sexual freak.

In his new book Death of the Cheating Man: What Every Woman Must Know About Men Who Stray Ray J speaks in-depth about a woman with whom he carried on a longtime affair. Throughout she is only referred to as “KK.”

It’s not difficult to connect the dots — he co-starred in Kim Kardashian’s sex tape, after all, and she was married to music producer Damon Thomas from 2000-2004, divorcing a year after that infamous sex tape was made.

“We’d known each other for a while before we dated and there was a mutual attraction, but she was married,” Ray J wrote. “She let me know she wanted to get with me.

Kim Kardashian gets an apology for fake marriage claims >>

“She left her husband for me as soon as we started having sex and things between us got intense really fast. After that, I felt obligated to be with her.”

“We were like animals; sexually free to try anything, and we did.”

“For years KK and I had a great sex life. There was more to our relationship, but the majority of it was about our wild and extreme sexual chemistry. She was a straight freak who was down to do whatever, whenever and that seriously hypnotized me.”