Howard Stern is proving he has a tender heart as the newest judge on America’s Got Talent. Turns out it isn’t easy to tell a 9-year-old kid they don’t make the cut! 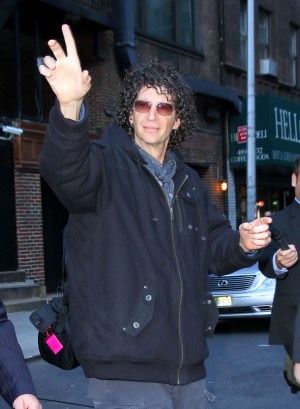 Howard Stern is finding out firsthand that dashing a young boy’s America’s Got Talent dreams isn’t easy. The notorious “shock jock” radio host just might surprise viewers who are expecting the newest judge to be coldhearted.

“There were times when I was downright compassionate,” Howard Stern told reporters outside of AGT‘s first auditions of the season held in Los Angeles.

The 58-year-old, who is currently commuting cross-country to make both the AGT auditions and continue his Howard Stern Show radio gig in New York, said he’s not trying to play into any expectations about him.

PTC furious over Howard Stern on America’s Got Talent >>

Yet the man known for have no qualms about getting into the personal details of his radio guests’ lives is grappling with being the one to shut down the dreams of young contestants.

Howard Stern shared, “It’s a little weird, the first day out I buzzed a 9-year-old kid. The kid was adorable, but I did it, man, you’ve got to do it. I said, ‘Look, you’re cute, you’re adorable, but, goodness gracious, you don’t belong on America’s Got Talent,’ and you just feel like the devil himself.”

Howard Stern is set to make his America’s Got Talent television debut when the seventh season premieres this summer!