He’s worldly, moral (to a point) and can knock your head off with his vampy karate chop. Of course you know we’re talking about Elijah from The Vampire Diaries. Read on to find out what actor Daniel Gillies thinks about his vampire alter ego, Elijah. 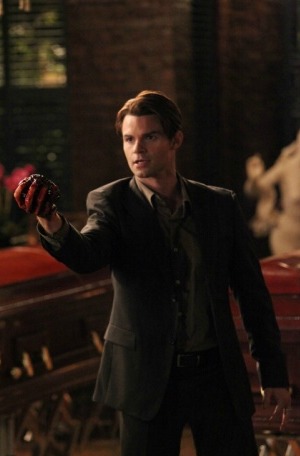 Elijah was the first Original to arrive in Mystic Falls during season two, searching for the doppelganger — Elena.

There’s no question about it: Elijah was originally a terrifying addition to The Vampire Diaries, but after watching the character progress, he’s become the vampire we should fear, but can’t help loving.

The actor who plays Elijah, Daniel Gillies, recently chatted all things Elijah with TV Guide, starting with Elijah’s introduction to the show.

Gillies explained, “In the beginning I was a very old vampire who was going to live like two episodes.”

The now fan-favorite added, “They didn’t know I was going to be a brother, I was [just] a henchman.”

Elijah might be moral to a fault, but when he’s around, heads are going to roll.

Perhaps that is why fans are so smitten with the character. Daniel Gillies has another thought.

Gillies said, “When Elijah shows his face you know things are going to happen. When he turns up he’s exposition and movement and the story is taking flight — or maybe fans just like his multiple haircuts.”

We do love his ever-evolving hair… Hey, Original vampires can be sexy.

During last week’s big episode, “All My Children,” Elijah took things to a place he wasn’t very proud of. He took Elena hostage as a bargaining chip to save his own existence.

The actor said, “Elena came quite close to peril and closer to peril than he ever thought she would and there’s a disgrace in that. He can be vicious and can be strategic, but he’s never reckless and this was one of the few times on the show we’ve seen him be absolutely reckless in order to get what he needed.”

He added, “Sure, it was his life and the life of his brothers and sister, but placing Elena in the position of being a hostage was probably something he would change if he could go back or at least make certain she wasn’t in true danger.”

As for who Elijah would team up with for world domination, that’s simple: “I really enjoy my scenes with Ian Somerhalder. There’s something very funny about those two in a scene together — they’re sort of an odd couple. Elijah is the sadistic, quiet, calm zinger-type comedy, whereas Damon is this snarky, sometimes b***hy and tempestuous vampire.”

Wait for it: “Of course, if I could team up with anybody, I just feel like if [Klaus and Elijah] could ever solve their differences the world would be theirs.”

Oh, please give us a Klaus and Elijah word domination tour!

Has Elijah become your favorite?