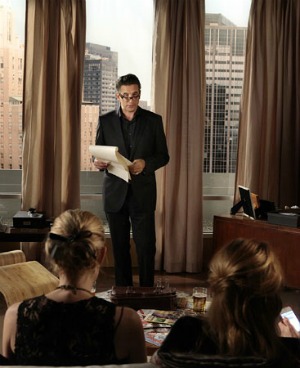 Gossip Girl is certainly heating up with Blair on a mission to dissolve her marriage to Prince Louis, so she can properly move forward with Dan — not Chuck.

Hold tight Dan and Blair fans, there might be a loophole in Blair’s prenup.

As seen in this photo from the CW, William van der Woodsen is back on the scene to help his family through a “crisis.”

The CW’s official synopsis for “The Princess Dowry” reads: “Blair thinks Cyrus (Wallace Shawn, who does not appear in the episode) may have found a potential loophole in her prenup. Chuck and Georgina (Michelle Trachtenberg) partner up in a scheme, but it has an unpredictable outcome. Meanwhile, a family crisis brings William van der Woodsen (Baldwin) back to the Upper East Side.”

This fishy scheme between Chuck and Georgina is going to spell disaster — there’s no question — but a disaster for who?

Check out a preview for Gossip Girl’s new episode, “The Princess Dowry,” and get ready for more Billy Baldwin as William van der Woodsen.

Once you’ve perused the video, hit up our comments section and tell us what you think of Gossip Girl.

Is it giving you your dose of dish?

10 mins ago
by Daisy Maldonado