Record producer/British gabster David Gest claims late pop stars Michael Jackson and Whitney Houston were once head-over-heels in love with each other — and he believes Michael could have saved Whitney from her struggles with substance abuse. 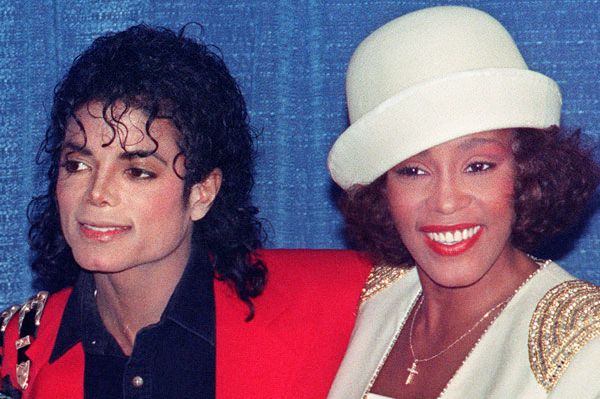 Michael Jackson and Whitney Houston really could have been the King and Queen of Pop.

The always chatty David Gest is shedding new light on the friendship between the late chart-toppers. Gest says both singers confided in him about being in love with with one another, but all hopes of romance fell through when Michael got cold feet.

Gest, an ’80s record producer, believes Houston “really wanted to marry” Michael, but her dream was dashed when the “Thriller” icon became too shy to make a move.

“She really loved Michael and he adored her,” the Brit, who was a close confidante of both singers, told The Sun this week. “Michael told me they once shared a passionate kiss and she told me she was at one time very much in love with him… Later, he [Michael] confessed to me he should have made every move.”

Gest interviewed Whitney for his critically-acclaimed 2011 documentary Michael Jackson: The Life of an Icon. After watching the once-powerful pop vocalist struggle to hold notes, he’s convinced the “Exhale (Shoop, Shoop)” singer “would not have done drugs” if she’d been with Michael.

“She never did drugs prior to her marriage to Bobby,” Gest retorted. “She was this great movie star, great beauty, this beautiful woman who people looked up to all over the world… And he was her downfall. Point blank, he was the reason.”

This isn’t the first time Gest has spoken frankly about the friendship between Michael and Whitney. His MJ documentary contained this little blurb about a curious encounter involving Jackson, Houston and the pop king’s pet chimp, Bubbles.

“Whitney was having dinner with Michael at his Neverland home when she accidentally dropped her knife under the table,” Gest recalled.

“While Michael was retrieving it for her, Whitney felt her toes being sucked. She moaned, ‘Michael, is that you? Don’t stop. That’s so sensual.’ Yet Michael’s head popped up and her toes were still being sucked. It turned out it was Bubbles.”

That David Gest… He’s always good for a laugh.