This week, Modern Family tackles every father’s worst nightmare — sex and their teenage daughter. What started off as a fairly normal episode turned into a PSA about dishonesty, paranoia and “the talk” no one wants to have. 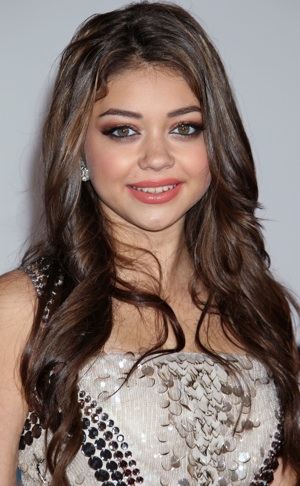 On Modern Family, brunch is the root of all evil. When the Pritchett-Dunphys get together for a family meal, all heck breaks loose.

First, Cameron (Eric Stonestreet) uses the gathering to grill Claire (Julie Bowen) about his missing Tupperware. Apparently, he let her borrow it and it was never returned. She says it was, he says it wasn’t. So it begins!

Little did he know, it wasn’t legit. Mitchell was there to give it a little “push,” (i.e. he cheated for him). Jay discovers he’s been living a lie and is at a crossroads. Should he tell his golf buddies the truth?

Luke (Nolan Gould) and Manny (Rico Rodriguez) notice all the attention Lily (Aubrey Anderson-Emmons) receives at brunch. Luke confesses, “We used to be the cute ones… We need to take her down!”

The duo comes up with a plan to taint Lily’s image. They attach a plate of cookies to a device that, once activated, will knock over a carton of milk. Thus making a mess and putting Lily in the hot seat.

But instead of luring her, Cam falls for the chocolate-y bait. He spills milk all over the floor, slips and accidentally falls on Beatrice, Lily’s My Sweet Companion doll. Phil takes Lily and the rest of the girls to the mall to get Beatrice fixed. It turns out the doll has health insurance complete with a deductible.

Cam convinces Mitchell to visit Jay at the golf course, pushes Gloria (Sofia Vergara) to spend the day with Claire and pays Luke and Manny $20 to clean his car. Why? Because he wants his Tupperware and he knows Claire has it — somewhere. He uses his injury as an excuse to get alone time in the house. 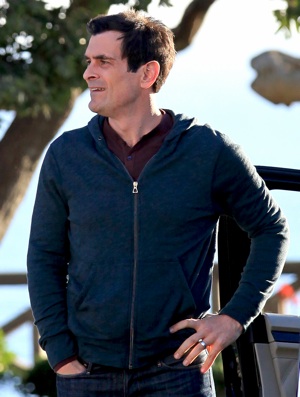 During the drive to the mall, Haley (Sarah Hyland) and Alex (Ariel Winter) engage in food court banter. They turn a simple conversation about Cinnabon into a war of words. Phil breaks up the argument and says they’re not going to deprive themselves because of “Haley’s aversion to…” But before he can finish, Alex bursts into laughter.

“Haley’s aversion” sounds a lot like “Haley’s a virgin.” Phil quickly picks up on the joke and is not happy.

Haley’s deflowering has been a well-kept family secret. Even Claire knew about it, but only because she dragged it out of her boyfriend Dylan. And let’s be honest, he’s not the brightest bulb in the box.

While in Cam’s car, Manny and Luke decide to go joyriding at a mind-blowing five miles per hour. They drive by the house of Manny’s crush Miranda, who’s shocked to see him behind the wheel.

At the golf course, Jay feels uneasy about his nickname. But decides to keep the hole-in-one secret to himself. Mitchell rushes in, sees the gang and assumes Jay’s spilled the beans. Jay tries to cut him off but it’s too late. Mitchell blurts out the truth, forcing Jay to come clean.

Gloria hunts down Claire and attempts to join her for yoga. Claire says she has a headache and can’t work out. Gloria immediately sees through her lies. Later on, Claire returns to the same plaza and Gloria confronts her. Claire finally cracks and reveals she’s going to the shooting range. She calls it her “sacred space,” and says it’s a stress reliever. Gloria thinks it’s a great idea and swears that her secret is safe.

After thoroughly searching the house, Cam finally spots his missing Tupperware. It’s hidden in one of Claire’s top cabinets. He steps on a drawer and nearly breaks his back trying to get it. He crashes on the floor, and Claire runs in to find him with the Tupperware in hand. Instead of explaining himself, he holds up the container and says, “Um, this had a lid.”

While at the doll doctor, Phil and Haley have a metaphorical conversation about sex without actually saying the word. Phil prides himself on being a cool dad but can’t deliver a quippy line to save his life. He quickly changes the subject and suggests Haley grab a table at the food court. She asks, “Do you want the counter or a booth?” Phil takes a dramatic pause and replies, “Whatever seems right to you. I trust you.”

Awww. It doesn’t take much to read between the lines. Phil loves Haley and even though he’s a bit disappointed, she’s still his daughter. He’ll always have her back, no matter what.

What did you think of this week’s Modern Family?