Conrad Murray is appealing his conviction in the death of Michael Jackson — and he still insists the King of Pop is the only one to blame. 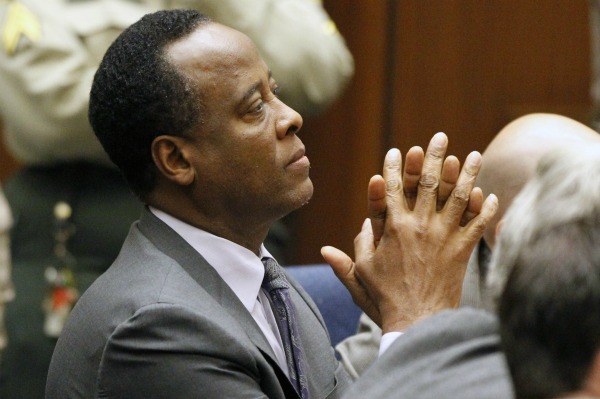 Conrad Murray was convicted of manslaughter in the death of Michael Jackson, but he is still fighting tooth and nail.

The defrocked doc — his medical license has been revoked in both Texas and California — is appealing his conviction on the grounds that he was not allowed to try to prove Jackson’s stress over huge financial pressures caused him to self-administer the fatal dose of propofol.

“Mr. Jackson was in debt approximately $440 million and desperately needed to fulfill a contractual commitment at the O2 arena in London,” state legal documents filed with the court today.

Conrad Murray got what he deserved says Jackson family >>

“He was on the verge of losing his entire estate to foreclosure,” Murray’s lawyers claim. “The pressure to fight through his insomnia, to rehearse and be the entertainer he was in his earlier years was overwhelming.”

“His motivation and resulting desperation were relevant to show a likelihood or reason to act in a manner inconsistent with good judgment.”

Basically, Murray is still singing the old song that Jackson accidentally killed himself with a dose of propofol while the doctor was out of the room — a claim a jury has already shot down.

Murray is also asking to be released from jail pending his appeal, but the LA County District Attorney says the dastardly doc is still a danger to society since he will not accept responsibility or show remorse for the “reckless and criminal conduct that directly caused Michael Jackson’s death.”