Adele flipped the bird during a live telecast of the BRIT Awards last night — but she has nothing to be sorry for. Instead, the event’s organizers and the host are flooding her with apologies! 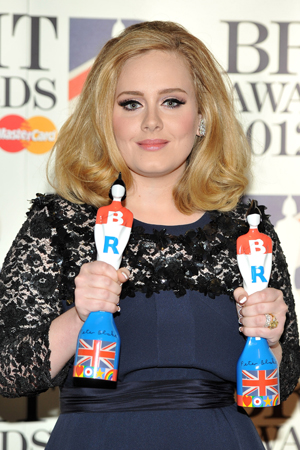 Things really are different across the pond: M.I.A. flips the bird at the Super Bowl and is flooded with scolds from the Federal Communications Commission, the NFL, NBC and Madonna herself. On the other side of the Atlantic, Adele gives the middle finger on live television and receives sincere apologies from both the BRIT Awards organizers and James Corden, the British actor, comedian and award show host who cut the singer off during her acceptance speech.

“We regret this happened and we send our deepest apologies to Adele that her big moment was cut short this evening due to the live show over-running,” said a statement from BRIT Awards organizers. “We don’t want this to undermine her incredible achievement in winning our night’s biggest award. It tops off what’s been an incredible year for her.”

Host James Corden cut Adele off as she was delivering an acceptance speech for the night’s top honors, British Album of the Year. “I got cut off during my speech and flung the middle finger. But that finger was to the suits at the BRIT Awards, not to my fans,” Adele told reporters after the event.

That gesture was also not directed at Corden, but he too felt bad “about having to cut Adele off” and “I don’t understand why I was made to.”

“I was having the best night of my life and then I was told to cut her off,” Corden said in a post-show interview. “She’s the biggest star in the world and I love her. I don’t understand what happened. I’m really upset.”

In addition, U.K. television station ITV, who broadcast the event live, has also issued a formal apology to Adele. “The BRITs is a live event. Unfortunately the program was over-running and we had to move on. We would like to apologize to Adele for the interruption.”

What do you think about Adele’s bold blunder onstage? Is it deserving of M.I.A.-style scolds or sincere apologies?