Joe Manganiello isn’t afraid to strip down for the sake of realism. The True Blood werewolf talks taking it all off in the latest issue of Out. 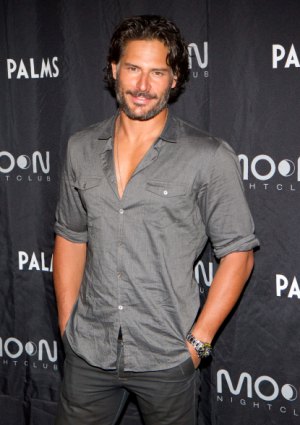 Joe Manganiello is willing to bare his butt cheeks for the sake of a role. The True Blood and Magic Mike actor, who covers the latest issue of Out, recently shared his philosophy on working hard and stripping it all off.

“As far as the butt cheek stuff goes,” Manganiello said of his derriere’s appearance in True Blood, “it just makes sense. It’s not gratuitous; it’s realistic.”

With a slight dig at Twilight‘s use of shorts to cover their werewolves’ parts he explained, “If you’re a werewolf and you transform, you lose everything and there are your butt cheeks. The show is a deconstruction of supernatural creatures. It’s not like other werewolf projects, where you magically reappear with tiny jean shorts on.”

“I like working hard,” the 35-year-old said of his physical condition. “It’s my letter of gratitude to [creator and producer] Alan Ball for giving me this opportunity. Vampires are animated corpses, they can get away with not looking like they go to a gym. I’m a wild animal — that’s how I should look.”

Joe Manganiello is back on the singles scene >>

Even though Manganiello isn’t shy about showing his body on film, he has been known to be at a loss for words when pressed for personal details. When asked if he stuffed his g-string while filming as stripper Big D**k Richie for Magic Mike the actor replied sheepishly, “Um, I’ll let everybody see the movie and they can decide.”

Yet he did go on to share there wasn’t much grooming necessary on set despite the skimpy wardrobe. “I don’t have any body hair,” he said. “It stops at my neck. I’m part Sicilian and Armenian.”

“I love my job so much,” Manganiello said of his role on True Blood. “It utilizes each part of my eclectic personality. There’s the kid who loves monsters, and I can be athletic, but I also love history and I can research wolves and Southern dialects. The dialogue is so rich — it’s Tennessee Williams with Chekhovian layers — and that fulfills my bookwormy playwright side. I’m so fortunate. Plus, I get to have a beard all the time.”

The fifth season of True Blood is set to premiere this summer along with more of Joe Manganiello’s butt cheeks. He promises, “There’s going to be a whole new pack of werewolves on this season.”

We can hardly wait!