Attorneys for Sugarland are shifting the blame from the country group to fans in the Indiana State Fair disaster. 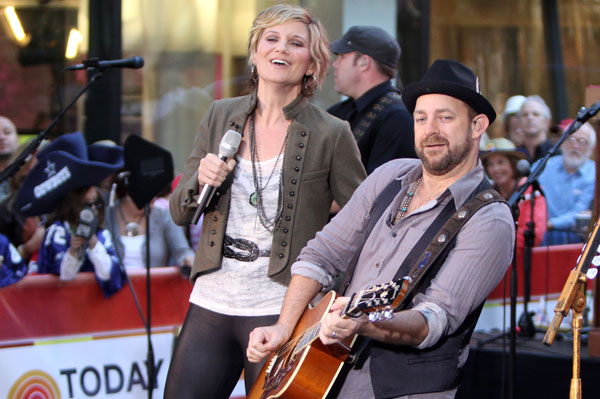 Sugarland was devastated when their stage collapsed at the Indiana State Fair in August, ultimately killing seven music fans. Jennifer Nettles and Kristian Bush expressed their sadness in the days after the horrific accident — they even played a free show as a benefit for the victims and their families.

“We have taken a couple of days to try and even begin to emotionally process the magnitude and gravity of the tragedy in Indiana on Saturday. While the path to healing from this type of trauma and loss is long and winding, we wanted to reach out and update you on where we are and how we are,” they wrote in a website statement.

Families of the victims later filed a lawsuit against the band and their management, citing their negligence in continuing with the show when winds started.

Now, attorneys for the Texas-born band are fighting back, saying the fans are to blame for not leaving the show, calling it “a true accident, or act of God.”

“Sadly when a tragedy occurs, people want to point fingers and try to sensationalize the disaster. The single most important thing to Sugarland, are their fans… for anyone to think otherwise is completely devastating to them,” said Gail Gellman, Sugarland‘s manager, in court documents.

Naturally, the victims and their families are upset with the statement.

“Sugarland’s response is a carefully crafted legal document that inappropriately attempts to distance the band from the responsibilities incumbent upon the show performers as to the safety of their fans… And this spin doctoring of Sugarland’s role in the case is both offensive and outlandish,” said Carl Brizzi, attorney for Heather Goodrich, the wife of one of the victims.

“Outraged. Furious. Ridiculous… I was knocked unconscious,” concertgoer Jill Polet told Cincinnati.com of her feelings about Sugarland’s statement. “The very last thing I remember is the guy coming on to say ‘The show’s going on. Nobody go anywhere. We’re bringing them out.'”

It sounds like this is going to get messier as the lawsuit goes on.