Adam Levine and girlfriend Anne Vyalitsyna have divulged secrets of their sex life to Howard Stern. Find out why we could be expecting an Adam Jr. to arrive sooner rather than later! 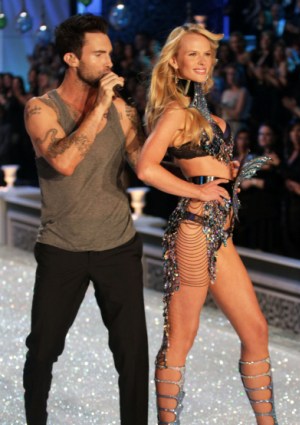 True to form, Howard Stern pried intimate details from Adam Levine and Anne Vyalitsyna when the pair paid a visit to his radio show. Some of their remarks have us wondering how it could be a baby isn’t already on the way!

“This is the longest, most functional relationship I’ve ever been in,” Adam Levine told Howard Stern of his two-year romance with model Anne Vyalitsyna. “I don’t want to screw it up.”

The couple met in 2010 when Maroon 5 was hired to play at a party for the Sports Illustrated Swimsuit Edition. Anne, a 25-year-old Russian model, has appeared in the magazine for a notable eight consecutive years.

Hold your farts! Adam Levine clenches on The Voice >>

Sharing her first impression of The Voice coach she told Stern, “He thought I was a stuck-up b**** and I kind of thought he was a d***bag musician.”

Despite their loathe-at-first-sight meeting, the pair reportedly went for drinks that evening and have been together ever since — pressing their luck in the bedroom.

Getting into details of their sex life in a conversation described as “TMI” by OK!, Adam Levine revealed the couple practices “a fool-proof birth-control system,” the pull-out method.

While Wikipedia reports the pull-out method, sometimes referred to as pull and pray, has been used for a couple of millennia, its reputation does not back up the singer’s fool-proof claims. The site states, “Observed failure rates of withdrawal vary depending on the population being studied: Studies have found actual failure rates of 15–28 percent per year,” compared to condom failure rates of 10-18 percent.

Despite getting into such personal details during their The Howard Stern Show visit, Anne Vyalitsyna insisted she was happy to appear alongside Adam Levine. “I am actually really excited to see how much you can push us,” she commented of Howard’s notorious prying ways. “That’s really cool.”