How fun would it be to have your real-life boyfriend cast as your on-screen love interest? Let’s ask Modern Family’s Sarah Hyland — she knows all about it. 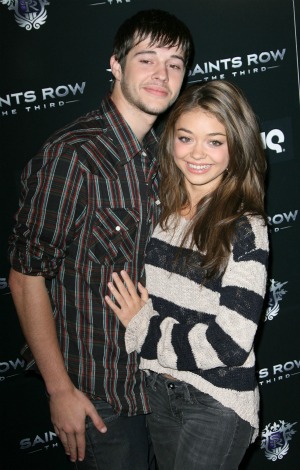 Modern Family has cast the latest love interest for Haley Dunphy (Sarah Hyland) and the man they chose might surprise you — it just so happens to be Sarah Hyland’s boyfriend.

So, how is his character introduced on the ABC comedy?

Ethan is making the move to town in order to attend college, plus he’s the nephew of one of Claire Dunphy’s (Julie Bowen) friends.

Of course, it couldn’t hurt to have mom introduce you to the new hottie, could it?

When the Modern Family parents become involved there’s never a dull moment. Do you think Ethan can handle the Dunphy family?

This isn’t Sarah Hyland and Matt Prokop’s first time appearing in a project together. The adorable pair appeared in Conception together and starred in Disney’s Geek Charming.

That’s not all. They’ll also appear in Struck by Lightning, written by and starring Glee‘s Chris Colfer.

Modern Family is continuing to dominate during this year’s awards season. The show recently picked up the comedy series award and episodic comedy award for “Caught in the Act” at the Writers Guild Awards.

We’ll be keeping an eye out for Matt Prokop’s first appearance. Head over to our comments section and sound off over the casting dish…

What do you think of real-life couples starring together?