Reality fans will soon be seeing a lot more of teen singing star Rachel Crow. The former X Factor contestant has inked a recording contract with Columbia Records and a deal to star in her own comedy series on Nickelodeon just two months after her stunning elimination from the talent show. 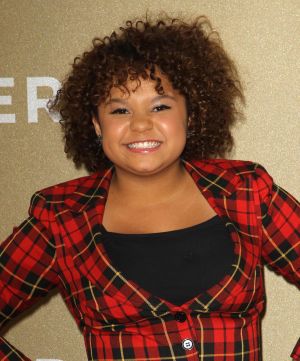 Minus the pregnancy scandal, of course.

The pint-sized powerhouse, who was a favorite to win the $5 million grand prize on the first season of The X Factor, has inked a recording contract and a deal to star in her own television series on Nickelodeon (Nick).

All of this despite her controversial exit from the ratings-challenged Fox talent show. In December, Rachel finished fifth on The X Factor, but was left sobbing uncontrollably in front of millions after her shocking elimination — a fate fans placed squarely on the shoulders of recently-ousted X Factor mentor Nicole Scherzinger.

Crow tugged at the heartstrings of X Factor viewers with her tale of being born to a mother addicted to crack and later adopted into a loving family.

It didn’t take long for The Disney Channel to come calling. But it’s Nick that will get a shot at turning the young songstress into America’ next tween sensation.

The network that catapulted Miranda Cosgrove and Amanda Bynes to fame is developing a comedy pilot for the 14-year-old reality star.

“We are in the early stages now. We haven’t figured out exactly what we will do with the show yet. I want it to be definitely very ‘Rachel’ — something that shows who I am and who I want to be,” Rachel told The Hollywood Reporter Wednesday.

“It’s been amazing,” the teenager added. “A couple days after the elimination I just found myself sitting home asking myself, ‘What am I going to do now?’ And I never would’ve thought that this is what I was going to do now… I feel very blessed to have all this.”

Rachel has also landed a recurring role on Nick’s newest comedy series, Fred: The Show. She joins the cast as Starr, “an eccentric girl who acts and sings and, as her name indicates, wants to be famous,” The Reporter writes. The curly-topped crooner is expected to appear in at least five episodes of the series, airing in the spring.

Additionally, Crow has been signed to Columbia Records through a partnership with Syco, the company owned by her X Factor coach Simon Cowell.

“I am incredibly happy for Rachel,” Cowell said this week. “This girl has it. We saw her potential at the first audition and Nickelodeon and Columbia are the right homes for her.”

Nickelodeon chiefs have yet to announce when Rachel’s pilot will be shot. No word on a possible air date.