Cammy in the crosshairs: Gossipmongers can’t stop gabbing about the rumor that a newly-single Russell Brand has a killer crush on actress Cameron Diaz. 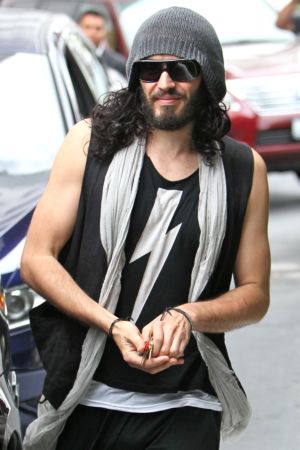 With the ink still drying on his divorce papers from Katy Perry, Russell Brand has wasted little time dusting off his jeggings and jumping back into the dating pool.

Russell broke up with “I Kissed a Girl” singer in December, 14 months after they were married in India. A judge approved the divorce on Feb. 8, but under California law, the Brands won’t formally become exes until June.

The comedian blames the breakdown of the once-happy union on the couple’s nine-year age difference. So naturally, he’s on the hunt for someone a bit older.

That’s where 38-year-old Cam comes in.

“Russell made a list of women he wanted to possibly date and Cameron was on that list,” a friend of Twitter’s own Rusty Rockets tells New Weekly magazine. “He’s already working the angle.”

Rusty better be sure to eat his Wheaties. The What to Expect When You’re Expecting actress is one of Celeb-ville’s most notorious “Cling Things,” according to urban legend. Cameron’s penchant for becoming too emotionally attached is oftentimes a turn-off for her would-be suitors — and at the root of many of her breakups, snitches say.

Diaz’s romantic resume includes love affairs with singer/actor Justin Timberlake, British model Paul Sculfor and most recently, New York Yankees third baseman Alex Rodriguez. But it was her 2009 relationship with The Voice’s Adam Levine that crashed and burned when Cam began frantically calling and texting the musician after just a few weeks of dating.

“It’s how she is with every man. When Cameron likes someone, she smothers him…”

That doesn’t mean Russell isn’t in for some competition for Diaz’s affections. Word ’round the Snitch Circuit is awash that Cam is secretly dating hip-hop mogul Sean “Diddy” Combs.