Was Aretha Franklin really in too much pain to attend Whitney Houston’s funeral? Or did Whitney’s mom Cissy Houston ban the legend over a spat? 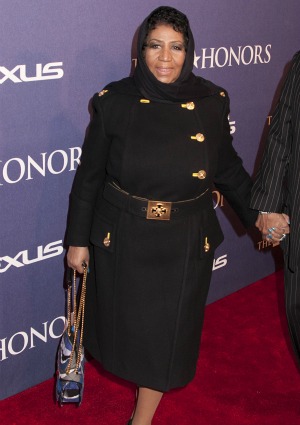 Aretha Franklin was scheduled to speak and perform at Whitney Houston‘s funeral on Saturday, but mysteriously backed out at the last minute. Kinda strange for a woman Whitney described as her honorary godmother, right? So what happened?

Franklin released a statement the morning of the funeral saying leg problems prevented her from showing up.

“Regretfully, I am so sorry that I was unable to be with you at Whitney’s service today,” she said.

“I had every intention of being there. But unfortunately I had terrible leg spasms and locked leg muscles until 4:00 a.m. this morning following my concert last night, which I’ve been having for the last few days.”

“I feel it necessary and very important to stay off my leg today as much as possible until concert time this evening. My heart goes out to my dear friend Cissy, Dionne, Bobbi Kristina and the rest of the family. May God keep them all. — Aretha & the Franklin Family.”

Alicia Keys performed in her place.

However, Franklin didn’t appear to be in too much pain Saturday night after her concert when she entertained 40 friends at the Ritz Carlton in New York, witnesses told the New York Daily News.

So what actually happened? Insiders say the real reason Franklin was a no-show at the funeral was because Whitney’s mom Cissy Houston uninvited her over a perceived slam.

Did Cissy think Franklin meant she failed as a mother? She’s not talking, but Franklin’s rep insists the leg pain story is the real deal.