Kate Upton is on top of the world, thanks to her sexy Sports Illustrated cover. Is she worried about what Victoria’s Secret thinks about her, though? Not exactly. 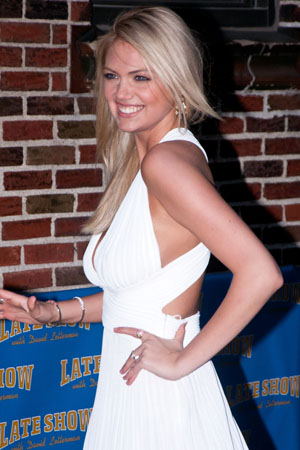 It seems like the only person not upset over the comments a Victoria’s Secret model scout made about Kate Upton is Kate Upton. The Sports Illustrated swimsuit issue cover girl was asked about it during an interview — and she made it obvious that it’s not a big deal.

“I didn’t even try out for the runway show. But also, I don’t think that anything she said was that mean,” she told Access Hollywood, referring to Sophia Neophitou’s comments to the New York Times.

“She’s like a Page 3 girl,” Neophitou said. “She’s like a footballer’s wife, with the too-blond hair and that kind of face that anyone with enough money can go out and buy.”

Still, the 19-year-old couldn’t resist getting in a dig at her adversary. “It’s all good — she can think that, I can think whatever I want to think about her.”

Upton’s not exactly begging for work — she’s the star of a sexy new Carl’s Jr. commercial, filmed in January. Why would the sexy model shill for burgers? Sex appeal, of course.

“The first thing you have to do is get people to watch your ads,” said Andy Puzder, CEO of CKE Restaurants. “I guarantee you there will be a very small number of young guys fast-forwarding through this ad.”

Anyway, we think Upton is just the type of girl who isn’t worried about eating a burger — or two.

“I love my curves. You know, I’m healthy and I think that’s what Sports Illustrated represents: Healthy, confident women who love their bodies,” she told Access Hollywood.

We’re with you, Kate.