Adele just won huge at the BRIT Awards — so why is she flipping the bird during her acceptance speech? Read on to find out what caused her M.I.A. moment. 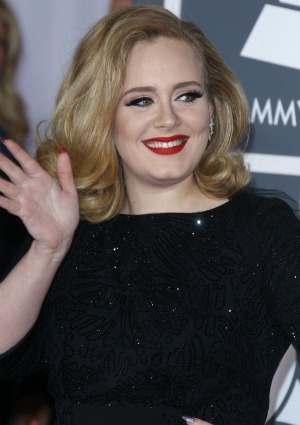 It was another huge moment in the smash career of Adele: Two big wins at the BRIT Awards, her home field version of the Grammys. So why was the “Rolling in the Deep” singer ticked off enough to pull an M.I.A. and flip someone off from the stage on live television?

Simple: She was victim of the dreaded “play off.”

Adele was in the midst of her second acceptance speech when host James Corden cut her off to introduce the final musical act, Blur. She only had time to get out the following: “Thank you very, very much,” she said. “Nothing is better than coming home with six Grammies and winning Album of the Year. Nothing makes me prouder than to be British.” She then quickly wrapped up and flipped the bird pointedly to someone offstage — a move caught by ITV cameras and broadcast across the U.K.

But the singer wants everyone to know exactly who that middle finger was meant for — and it most definitely was not her fans or anyone else watching at home.

“I was cut off during my speech but I wanted to thank the British public for all their support,” she said after the show. “I was held up with my voice and troubles but the album kept walking without me. I flipped the bird for the suits at the BRITS who cut me off. Sorry if I offended anyone but it was for them, not for the fans.”

Watch Adele flip the bird at the BRIT Awards:

Prior to the incident a different finger of Adele’s was drawing mucho attention. The singer was rockin’ some serious bling on the ring finger of her left hand — a totally different ring than the one she sported at the Grammys. Did boyfriend Simon Konecki pop the question?