Joan Rivers and Melissa Rivers are spilling the beans on who they really love — and hate — on the red carpet and point fingers at the one celeb they say is the biggest liar in Hollywood! 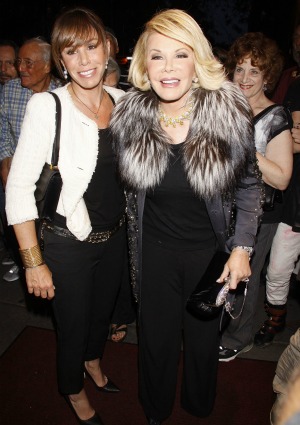 They’ve seen the best of the best and the worst of the worst on the red carpet — and now Joan Rivers and her daughter Melissa Rivers are spilling who they love and who they loathe for their personalities rather than their duds.

In an interview with The Front Row, the mother-daughter pair said they hate insincerity and love plain old nice guys.

“Jennifer Aniston doesn’t tell you the truth about anything!” Joan revealed. “I don’t like anyone that gives you the pat answer. For example, on a sitcom, you know they all despise each other, and then you hear, ‘Oh, we love each other.’ You go, ‘Next.'”

Who else is on their diss list? “Russell Crowe is miserable on the red carpet. Then get off the carpet! Don’t be there!” said Joan.

“Tommy Lee Jones. He’s miserable and he is going to make everyone around him as unhappy on the red carpet as he is. Don’t come to the party; don’t ruin it for everyone else!” Melissa added.

Also awesome? Stars who aren’t all about themselves, like George Clooney — he offered his coat to Melissa one freezing night when she was visibly shivering on job. Tom Hanks also gets the thumbs up: “He went away and got coffee for us and came back. It was so adorable,” said Joan. “He is a nice man.”

At the end of the day, though, it’s just fashion, and it’s just a TV show — and the Rivers’ think it’s all in good fun.

“We don’t take it seriously, and they shouldn’t either,” said Joan.

Read the complete interview with Joan and Melissa Rivers on The Front Row.