Drew Barrymore might be a mom soon! The actress was spotted over the weekend carrying a photo that just might have spilled the beans on her with-child status. 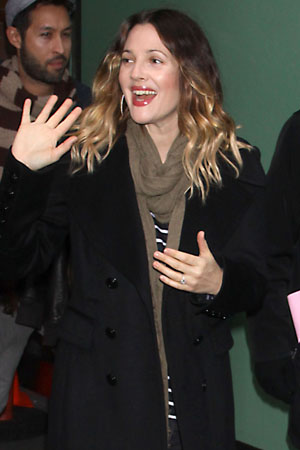 Drew Barrymore might be celebrating her upcoming marriage to Will Kopelman with a little bundle of joy. The actress was spotted leaving a doctor’s office over the weekend with a photo in hand, according to TMZ.

Big deal, right? Well, the photo looked a lot like a sonogram.

Kopelman proposed to Barrymore over their Christmas getaway in Sun Valley, Idaho. They dated for about a year before making it official.

The Big Miracle actress had a rough time growing up as the daughter of John and Jaid Barrymore. She went to rehab at 13 and eventually sought — and won — emancipation at age 15. Even with her upbringing, Barrymore has expressed interest in being a mother.

“Drew is so motherly,” a source told People. “Will would like to be a dad. Family is so important to him.”

Barrymore’s rep had no comment on the speculation. However, she reportedly told U.K. gossip magazine The Sun that she looked forward to becoming a parent.

“If and when I have children of my own I would be a different kind of parent. I have learned what not to do. I know I would have a great relationship with my kids,” she said. “The strange thing was, when I bought my first house in my early twenties my dad moved into the guest house — an irony, because we had never lived together.”

The actress never made up with her mother, telling W magazine that the pain she endured was hard to forgive.

“My mother and I split ways when I was very young and have never really reconciled,” she said in 2009.

Now, Barrymore is just focused on her new life and keeping things positive and happy.

“I just try to remember what’s important and just keep everything balanced,” the trendsetter told SheKnows in early February. “Do the things that I love and be around the people that I love the most.”

Do you think Drew Barrymore is pregnant?