Fox’s New Girl is adding a familiar face to its line-up. It’s been announced that Big Love alum Jeanne Tripplehorn has signed on for two episodes of the hit comedy. That’s good news for us, but bad news for Jess (Zooey Deschanel). 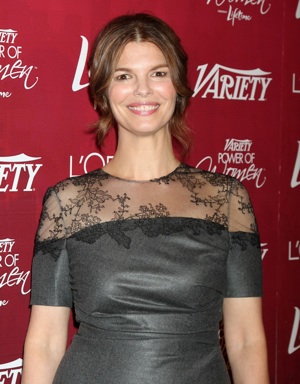 New Girl attracts guest stars like moths to a flame. The comedy has cast not one, but two well-known actors for future episodes.

According to The Hollywood Reporter, former Big Love star Jeanne Tripplehorn has been tapped for a multi-episode arc. The actress will be an antagonist to Zooey Deschanel‘s character Jess, who starts dating her ex-husband.

Who’ll be the man in the middle of these two beauties? Dermot Mulroney! Mulroney will play Russell, a parent to one of Jess’ students. The pair will meet, hit it off and begin a whirlwind romance.

Unfortunately, Mulroney’s ex-wife Ouli (Tripplehorn) is less than thrilled about their involvement. Look out Jess!

Tripplehorn will appear in episodes 20 and 21, which are set to debut in late March and early April.

Tripplehorn is no stranger to television. She recently ended a regular gig on the HBO drama Big Love. She starred as the first of several wives married to Bill Paxton‘s character.

Last fall, the actress also appeared in the Lifetime original movie Five, which focused on five women dealing with breast cancer. It was directed by five directors (including Alicia Keys, Jennifer Aniston and Demi Moore) and told five different stories.

New Girl should be a welcome change of pace!

What do you think of New Girl‘s latest casting coup?