An encounter with Etta James decades ago scared Chaka Khan off of ever injecting drugs, but unfortunately not off of them completely. 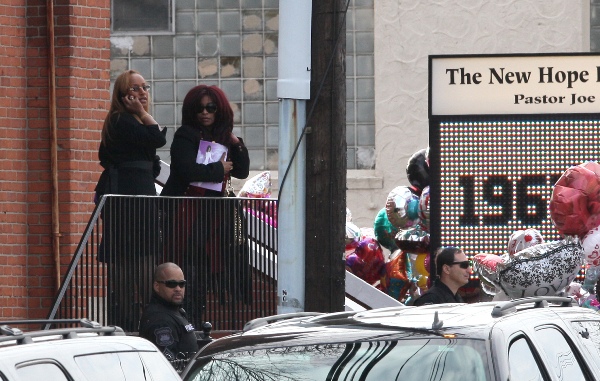 Long ago Chaka Khan received a lesson on drugs from Etta James; unfortunately the younger singer only took a small piece of the message to heart.

“When I first went to sign at Warner Bros. I met Etta James,” Chaka Khan told Britain’s OK! magazine. “She was standing outside in the hall waiting for me. I was a big fan, so I was really pleased to see her.”

Speaking of how the music business treats its stars Khan said previously, “It’s a very lonely existence. You are stuck in hotel rooms. They keep you insulated from the outside world so you perform like a dancing bear.”

“This is an ugly ass business,” the 58-year-old went on. “All we want to do is sing. We are highly sensitive people; we don’t want to feel pain. People are pulling from you and sucking from you. There are so many types of vampire[s] out there.”

Chaka Khan, pictured here with her daughter at Whitney Houston’s funeral on Feb. 18, has spoken publicly about her belief it was irresponsible of promoters to have the singer, known to have battled drug addiction, in Los Angeles a full week before her scheduled appearance.

“I performed with her at the Prince concert last May and we had a lovely time backstage together,” Chaka Khan recalled of her last encounter with Whitney Houston. “We sat in my dressing room for hours and talked. We laughed a lot.”

“We talked about addiction and music and [Whitney’s ex-husband] Bobby Brown and everything. But Whitney knew, if she was going to talk to me, that we were going to talk about getting her life together.”

“That was the last time I saw her. She gave me her number, I said, ‘Please call me.’ I let her know I was here for her. All I can say now is that I know she’s at peace. I can feel it.”