People haven’t been able to stop talking about Julianna Baggott’s grim, post-apocalyptic novel, Pure. Baggott’s depiction of our world after a nuclear holocaust is frightening and hauntingly rendered, and her characters leap off the page as the reader is drawn into this novel. We couldn’t put this book down, which is why it’s our Red Hot Book of the Week.

There have been many novels written in the post-apocalyptic and dystopian genres as of late, so readers might wonder what Pure really has to offer. After all, its main character is a 16-year-old, not-quite 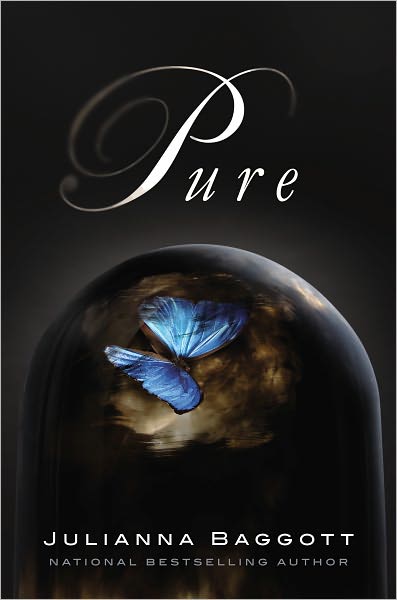 an adult, and it’s the first in a trilogy. It takes place in our world, yet it’s difficult to really recognize the setting because things are so different. Sound familiar? It probably does… yet Pure takes this very fleshed out genre to the next level through its intricately written characters and amazingly detailed world building.

Pressia Belze remembers life before the detonations. Not much, of course — just glimpses here and there, wisps of remembrance, too fragmented to call them memories. Since the nuclear holocaust, she has lived with her grandfather, caught in a world of nightmares. Pressia was lucky — her deformations are limited to her hand and a scar above her eye. But in an unimaginable world when men were fused to live animals and mothers to their own children as a result of the nuclear event, what hope is there for a 16-year-old girl?

Partridge has lived in the Dome his entire life. Sheltered and protected from the poison of the world outside, he lives his life in ignorant bliss. But when he starts asking questions about his mother, whether she could be alive on the outside, that innocence is shattered. Risking his life, Partridge escapes the Dome, only to find an unrecognizable place in which Pures are reviled and the Dome is blamed for the troubles the regular, disfigured population face. When Partridge meets Pressia, the two realize they can’t continue living in fear.

On the run, Pressia and Partridge must face difficult truths about the wildly different worlds they know. Secrets lie around every corner, and it’s only by working together that Pressia and Partridge can begin to come to terms with what has been going on around them. Baggott has built a frighteningly realistic world in Pure, and readers are sure to tear through this novel as they race to discover the fate of these two intertwined characters.