Stephen Colbert returned to The Colbert Report with a nod to his mother, Lorna Colbert. Find out how he honored his mother on the air. 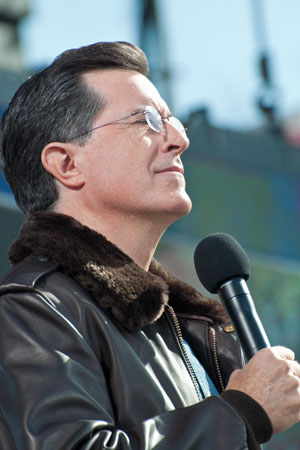 Stephen Colbert made his triumphant return to his Comedy Central show on Monday night, a week after he mysteriously canceled tapings to tend to a “family emergency.” Many speculated he was talking about his 91-year-old mother, Lorna Colbert.

“Oh, and one more thing. Evidently, having 11 children makes you tough as nails. Confidential to a lovely lady,” he said on The Colbert Report with a salute.

Colbert stays satirical most of the time, but he’s broken character to talk about his beloved family. Colbert grew up as one of 11 children, though his father and two of his brothers passed away in a 1974 plane crash.

The Colbert house was “a humorocracy,” he told Parade of his family life growing up. “Singing around the house highly encouraged.”

However, home life changed after his brothers and father died — and he grew closer to his mother.

“The shades were down, and she wore a lot of black, and it was very quiet,” he told Parade. “She was a daily communicant, and many times I was too. It was a constant search for healing. My mother gave that gift to all of us. I am so blessed to have been the child at home with her.”

Deeply religious, Colbert questioned his faith after their deaths. He also faced bullying at school, which made his life more difficult.

“I was very depressed about it,” he said. “I wanted the idea that I would see my father and brothers again, and it was heartbreaking to think that that wouldn’t happen.”

Eventually, he found the confidence to perform and landed a job as a writer with VH1. Now, he relishes the life he has with his own family in New Jersey.

“I desire to have what I would consider a normal life,” he told the magazine. “To have a wife and kids, and live in a suburban house, and wear khaki pants, and pick them up from the dry cleaner — I don’t see anything wrong with that. I think a lot of people who perform have a fear of being ordinary. They confuse ordinary with common.”

Glad to hear she’s feeling better — and that some celebs put their families over their careers.