Kate Middleton finally spilled the beans on the name of her adorable little puppy she shares with husband Prince William. Find out the special meaning behind the puppy’s name. 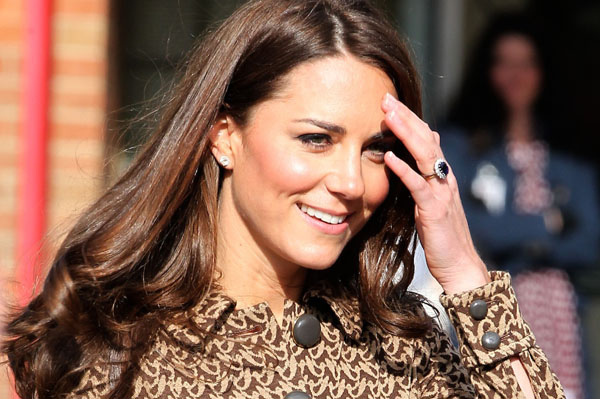 Kate Middleton might be on her own for the next few weeks, thanks to Prince William’s deployment to the Falkland Islands, but she’s not alone — she’s got their puppy to keep her company.

We didn’t know the name bestowed on the royal pooch, until now. The couple calls him Lupo, the Latin word for wolf. Middleton revealed the name of the big-eared black Cocker Spaniel during a visit with schoolchildren at Rose Hill Primary School in Oxford.

“She said, ‘What’s it called?’ And we said, ‘Would you like to give it a name?’ And she said, ‘I will call it after my dog,'” teacher Lisa Hancock told the U.K. Telegraph, adding that she couldn’t remember the name. St. James Palace later confirmed the name as Lupo.

We wonder how long it’ll be before Middleton’s BFF, Reese Witherspoon, gets the same dog. The Oscar-winning actress is pretty much in love with the Duchess of Cambridge.

“I was so excited to meet her. Y’all, she’s a princess,” she recently revealed on Ellen. “I mean, I would like to hang out. I’m not sure she wants to hang out with me. I could see that happening. She was really nice. She was lovely. She’s so composed. She seems like such a lady and I think it’s so nice nowadays to see someone with such nice composure and carries herself so beautifully.”

So true, Reese. We just hope little Lupo is good practice for a little Prince William or Catherine. After all, Lupo needs a pal, right?