Lindsay Lohan has been cast as legendary actress Elizabeth Taylor in a made-for-TV movie. Liz and Dick is expected to go into production for broadcast on the Lifetime network later this year. Now all Lindsay has to do is stay out of prison. 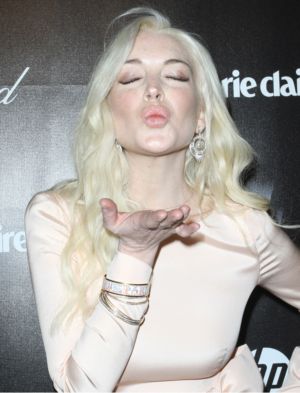 Liz and Dick is billed as a retelling of Taylor’s controversial love affair with her Cleopatra co-star, Richard Burton. The starlet hasn’t appeared on the small screen since her 2008 guest arc on Ugly Betty and a turn in the ABC Family comedy Labor Pains later that year.

Lohan outfoxed her Confessions of a Teenage Drama Queen nemesis Megan Fox for the coveted role as the late screen dame. Lifetime, which prides itself on broadcasting “Television for Women,” placed producer Larry Thompson in charge of casting. But the Hollywood vet confessed he was having a tough time choosing between the two actresses.

“I’ve been talking to Lindsay Lohan directly and with her reps and have been in conversations with other actresses, including Megan Fox. It’s a very serious selection. It’s like casting for Hollywood royalty,” he said last month.

Lindsay Lohan as Elizabeth Taylor? It could happen >>

After some deliberation, Thompson decided to give the role to Lohan… provided she can keep out of trouble past next week.

In recent years, Lohan’s once-promising career has been eclipsed by her addictions to drugs and alcohol and her well-documented legal woes. The one-time Disney Kid attempted a comeback last year by appearing in a nude pictorial on the pages of Playboy magazine.

Lindsay’s probation on various counts of driving under the influence, shoplifting and violating probation is scheduled to end next month. Per the terms of her contract with Thompson, Lindsay must stick to the rules of her probation and continue to follow the judge’s orders if she wants to keep her job.

Production on Liz and Dick is expected to begin this spring. An air date has not yet been announced.