Demi Lovato’s time in rehab was no picnic, but the star says she learned skills that will help her fight the good fight for the rest of her life. 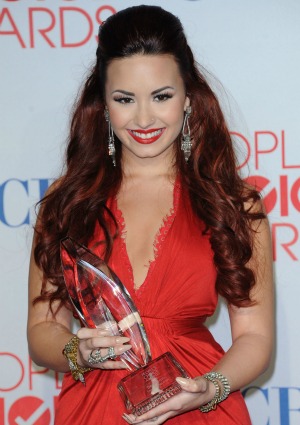 Demi Lovato is opening up about what went down in rehab — and the three friends who have been there for her every step of the way.

The “Skyscraper” singer told the Daily Mail what happened behind those walls, and why she might actually be successful in her recovery, unlike so many other stars.

“The key is that you have to want it,” Lovato said. “The problem with a lot of celebrities is that they go into rehab, but they don’t stay for the full amount of time. I wanted to go home after 30 days, but they told me, ‘No, you’re not better.’ I went through 14 hours of therapy every day. It wasn’t fun. There were sessions from seven in the morning until nine at night: Alcoholics Anonymous, Narcotics Anonymous, Anorexics and Bulimics Anonymous and Self Mutilators Anonymous. It was constant emotional work and exhausting; by the end of the day, all you wanted to do was sleep.”

“It was very humbling,” she said. “I had been used to waking up in hotels, getting room service for breakfast and having my room cleaned. Now I had to make my own bed.”

“I wasn’t allowed to use the bathroom by myself because they were afraid that I was going to purge, and we weren’t allowed to have razors, so I had hairy legs,” she laughed. “And we had no mobile phones.”

But she was able to take calls, and three friends made sure she knew she was not alone: Kim Kardashian, Selena Gomez and Miley Cyrus. “They called me and kept checking in on me and I never forgot that,” Lovato revealed. “Now they make sure I am doing good. Out of all the people in the world, they are the three who are really close to me.”

“I was very sick but luckily I got the help I needed and I’m here today, hopefully preventing young girls from doing the same things I did to myself.”

“I know that I have a voice and can use it for good or bad. It’s a gift from God,” she said. “I knew I could share my experience and be of service or not tell anybody and be like the rest of Hollywood and hide my secrets. I didn’t want to do that.”

“It’s an addiction and I’m going to have to fight it for the rest of my life,” Lovato concluded. “There’s no cure and I may mess up, but I want to be a better role model for my fans and my younger sister.”

We’re rooting for you, Demi!

Read the complete interview with Demi Lovato in the Daily Mail.