Whitney Houston is gone, but people are still cashing in on her image. Find out which belongings are going up for auction in March. 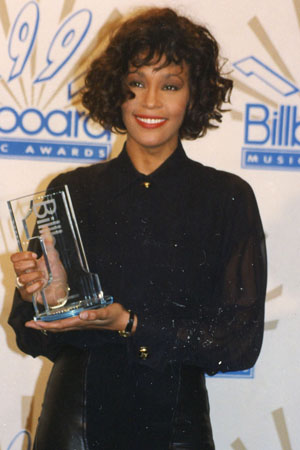 Whitney Houston was barely laid to rest 24 hours ago and people are already looking to cash in on her possessions with an auction. The late singer’s belongings — including a pair of pearl earrings and a vest from The Bodyguard — will go up for sale at Julien’s Auctions in Beverly Hills on March 31 and April 1, according to Reuters.

The auctioneer, Darren Julien, obtained the pieces after Houston’s Feb. 11 death at the Beverly Hills Hilton. Other items up for auction include “a floor-length, black velvet dress owned by the singer and valued at $1,000-$2,000,” according to the auction house. Other celebrity items up for auction include Charlie Chaplin’s cane, Clark Gable’s jacket from Gone With the Wind and a staff Charlton Heston used in The Ten Commandments.

Think an auction like this is a bit macabre so soon after her death? You aren’t the only one. However, it’s hardly the only way people are trying to make money from her untimely death — the movie studio behind The Bodyguard reportedly pulled the movie from Netflix to help increase DVD sales, according to Google Plus Weekly Dan McDermott.

McDermott even called the Netflix customer service and was told why the movie is gone from the service.

“Okay Dan, I just went and talked to my main supervisor as to why the movie had been pulled and the reason it was pulled was the production company pulled the streaming rights from us because all the publicity after Whitney Houston’s passing there was an opportunity to make really a very large amount of money on the DVD sales of her movies,” the rep told the host. “So they’re going to pull all the streaming titles we have of Whitney Houston so they can make more money off the DVD sales of her movies.”

Poor form, or smart business decision? Probably depends on who you ask.