Mark Wahlberg is getting rid of his tattoos, one at a time. Why is he making his children watch the painful procedures? For their own good, he says. 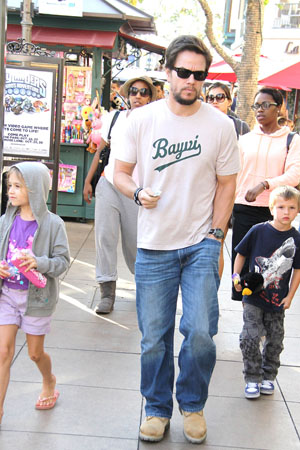 Some parents preach to their children, while others lead by example. Contraband star Mark Wahlberg is the latter — he forces his children to watch him during his painful tattoo removal sessions.

“[All the tattoos] have meaning to me, but it’s both personal and professional,” the actor, 44, told the Today Show on Monday.

“I don’t want my kids getting tattoos. And I wanted them to be [removed] by the time I did The Fighter because putting make-up on and covering them up has always been a pain in the butt.”

“I’ve taken my two older kids to the procedure so they see how painful it is and what I have to go through,” he added.

We’ve watched documentaries on tattoo removal — it doesn’t look fun at all. We can only imagine it’s worse seeing it in person.

“I don’t want my kids to be in the entertainment business either, which is why I’m trying to build a lot of [separate] businesses,” Wahlberg told the anchors. “If they feel [passionate about acting], and that’s the decision they want to make, then I’ll support them. But I’ll do everything I can to point them in another direction.”

He’s come a long way since his rough childhood in Boston.

“I’ve always said, ‘If I succeed as a businessman and I fail as a father, then it’s all been for nothing,'” he said. “That’s, by far, the most important role that I’ll ever play in my life… being a parent and a husband.”