Jessica Biel was reportedly spotted wearing her engagement ring at a weekend party. Are we finally getting our first look at the rock from Justin Timberlake? Not exactly. 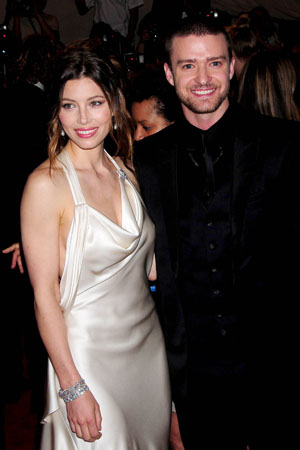 Jessica Biel might be getting more comfortable with her engagement to Justin Timberlake. The actress, 30, reportedly wore her diamond sparkler during the Saturday Night Live after party at Asellina in the Gansevoort Park Hotel.

“Jessica was showing off her ring,” a source told US Weekly. “They were very lovey. Holding hands,” another source added. “They kissed a few times in front of the crew.”

Timberlake was a surprise guest on the Maya Rudolph-hosted episode — he even imitated Bon Iver frontman Justin Vernon during one hilarious sketch.

The couple — on-again and off-again since 2007 — got engaged over the holidays in Jackson, Wyoming. The “Sexy Back” singer’s grandma later confirmed the news.

“He called me on Christmas Day and told me he’s engaged… The family loves Jessie… she’s a very sweet girl,” she said. “She’s a wonderful campaigner for the environment and Justin is, too. A fine young man. Jessica will be a lovely member of the family.”

The Magic Mike actress hasn’t worn her ring where cameras can see it, though — it was nowhere to be found during the 2012 Golden Globe Awards in January. Why the secrecy? Well, both like their privacy — and the engagement was a last-ditch effort for the relationship, according to sources.

“Justin knew that Jessica would dump him unless he committed to making her his bride, so his proposal was just lip service,” one source told the National Enquirer in January.

“He told friends that he has no intention of rushing down the aisle and he only went through with the engagement to get Jessica off his back… Rather than keep dealing with Jessica’s nagging, Justin caved to the marriage pressure.”

So, what about a date? It’s not likely we’ll find that out until it nears, but Grandma Sadie Bomar told RadarOnline what she knows.

“They don’t know if the wedding will be in Memphis or Colorado, it’s all very new they haven’t made any plans yet. Justin, his mom and dad and Jessica have all been in Montana all Christmas and New Year,” she said. “That’s when he proposed. Justin rang me himself on Christmas day to tell me about the engagement.”

We’re assuming Grandma Bomar is barred from talking to the press about it again… proud grandparents just can’t keep happy news a secret!