It’s Rihanna’s birthday! Of course, Chris Brown wished her a happy birthday on Twitter. Did she respond? Find out. 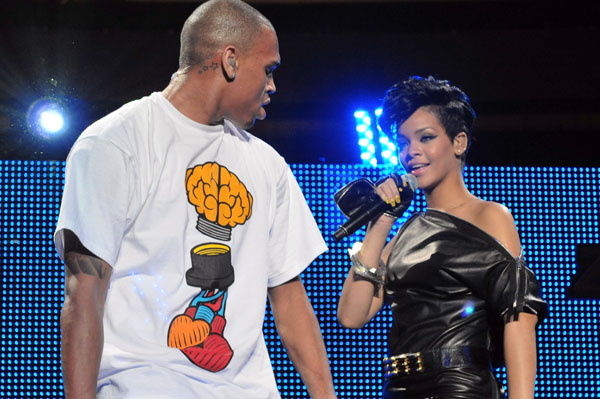 Chris Brown might be on everyone’s naughty list, but at least one person is still talking to him: his ex-girlfriend, Rihanna. The “Look at Me Now” singer tweeted to his former flame on her 24th birthday — and she responded.

“HAPPY BIRTHDAY ROBYN!” he wrote, referring to the Barbados-born singer by her real name.

“Thanks!” she wrote back. The public exchange is another inkling that the two are rekindling their once white-hot relationship. Whispers of clandestine hookups between the volatile pair started in January and gained traction after they were spotted leaving the same nightclub in Hollywood.

Their most recent sighting came at her birthday party last week, according to one guest inside the bash.

“If Cupid was here he would be very happy everyone @Rihanna bday party was coupled up,” tweeted partygoer “Katia C.”

“All I can say, CB was invited and she [Rihanna] was acting like the happiest girl on her birthday and probably got what she asked for.”

The two broke up in February 2009 after a violent altercation during Grammy weekend that left RiRi with a severely bruised and cut face. Fast forward three years later: Brown and Rihanna are talking and he gets heralded at the Grammys for his comeback.

“HATE ALL U WANT BECUZ I GOT A GRAMMY Now! That’s the ultimate F**K OFF!” he tweeted after several artists spoke out against his performances.

The problem with all of this Chris and Rihanna talk? He’s reportedly still dating Karrueche Tran. Oh, and he tried to hook up with a girl before the Grammys by using an unfortunate pickup line.

“Can I get your number? I promise I won’t beat you!” Brown allegedly asked the girl at the Lasio Professional Hair Care suite, according to US Weekly.

She politely declined and he later denied it happened.

Oh, Rihanna: We know the first love is the most difficult to forget, but you’re really better off.

Do you think Rihanna should give Chris Brown another chance?