Miley Cyrus added to her growing mural of body art by getting another tattoo over the weekend. Find out what she got inked on her body this time — and where she put it. 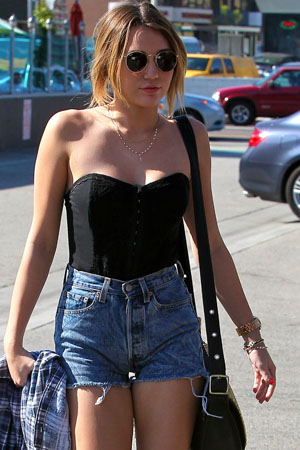 Miley Cyrus spent some time over the weekend at a tattoo parlor in Studio City, California getting her 12th piece of art inked onto the inside of her bicep. The new tattoo — a phrase that reads “love never dies” — is the latest in her bevy of statement pieces. The actress has everything from the phrase “just breathe” to a dream catcher on her ribcage.

Cyrus has talked at length about her artwork, saying that all have a special meaning for her.

“There’s so much negativity in the world and what you only need to hear is all the love. People try to say to me, ‘I just heard someone say this or that about you,’ and I just ignore it because it’s irrelevant. Love is what makes the world go around, and that’s all we need to focus on,” she said of her “love” ear tattoo.

One of her recent pieces, an equal sign on her middle finger, signifies marriage equality for all. Some fans blasted the singer and actress for supporting gay marriage as a Christian.

“Imagine finding someone you love more than anything in the world, who you would risk your life for but couldn’t marry. And you couldn’t have that special day the way your friends do — you know, wear the ring on your finger and have it mean the same thing as everybody else. Just put yourself in that person’s shoes. It makes me feel sick to my stomach,” she explained in Glamour.

“When I shared a picture of my tattoo on my Twitter page and said, “All LOVE is equal,” a lot of people mocked me — they said, ‘What happened to you? You used to be a Christian girl!’ And I said, ‘Well, if you were a true Christian, you would have your facts straight. Christianity is about love.’ The debate resulted in a lot of threats and hate mail to people who agreed and disagreed with me. At one point I had to say, ‘Dude, everyone lay off.’ Can’t people have friendly debates about sensitive topics without it turning into unnecessary threats?”

As for this tattoo? We’re going to say it’s about her boyfriend, The Hunger Games star Liam Hemsworth. Let’s just hope it doesn’t jinx their relationship.