Dame Judi Dench admitted to a British newspaper that she’s losing her eyesight. Read on to find out how she’s dealing with it — and her future work plans. 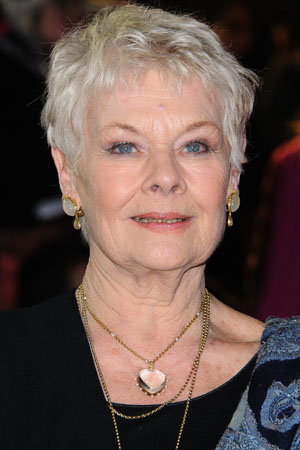 Dame Judi Dench is one of the most revered actors ever, but that doesn’t mean she’s some immortal being immune to the challenges of normal life. The British actress, 77, told the U.K. Daily Mirror that she’s losing her eyesight, thanks to macular degeneration.

“I can’t read scripts any more because of the trouble with my eyes,” she revealed. “And so somebody comes in and reads them to me, like telling me a story. It’s usually my daughter or my agent or a friend and actually I like that, because I sit there and imagine the story in my mind.”

Dench’s mother also suffered from the disease, so she was already aware of its devastating effects. She’s received treatment for the problem and doctors say it has stopped progressing, she added.

“The most distressing thing is in a restaurant in the evening I can’t see the person I’m having dinner with,” the James Bond actress said of the most challenging part of macular degeneration. “I know there might be something going on, but sometimes I can’t see it and that infuriates me as I think I’m really missing out on something.”

What is Judi Dench’s one regret? >>

The My Week With Marilyn actress adapted her life to her new condition, adding that she plans to buy an e-book reader so she can make words bigger.

“You get used to it. I’ve got lenses and glasses and things and very bright light helps,” she said. “I can do a crossword if it’s bright sunshine, but if a cloud comes out the next minute, I can’t see anything.”

The one thing we wanted to know? Whether or not the British treasure will continue working on films like the new James Bond movie, Skyfall.

“As long as there is a possibility of working, I’m not going to retire because if I retire, nothing will work any more and it’s hard enough as it is,” she said. “I’m very conscious that I’m in the minority in that I love what I do. How big is the number of people who are running to work to do a job that they like? And how lucky to be employed at it — how incredibly lucky.”