Tyler Perry shared his memories of Whitney Houston at her funeral on Saturday. Find out what he had to say about her faith and love of the Lord. 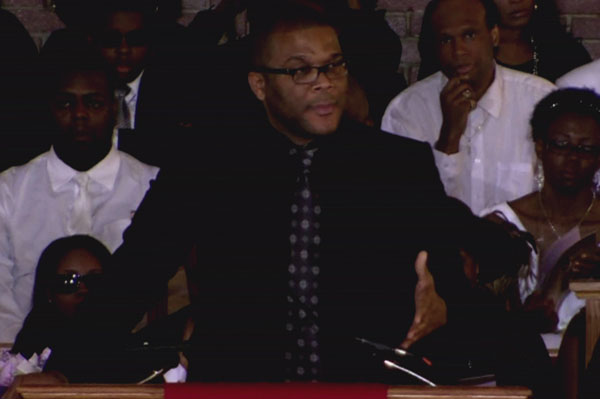 Writer and director Tyler Perry brought out his preacher side for his eulogy at Whitney Houston’s funeral on Saturday in Newark, New Jersey. The Diary of a Mad Black Woman creator talked about his relationship with the late singer — and where she’s going now.

“This same grace led her all the way to the top of the charts, sold all of these albums and just done some amazing things, won all these awards. She sang for presidents. And there was a grace that kept on carrying her, and that’s one thing I know,” he said.

Perry flew Houston’s body on his private jet from Los Angeles back to her New Jersey hometown earlier this week. It was her love for God that helped forge the friendship between the two.

“The other thing I know, for sure,” he added,” and this is more important than anything she’s ever done in her life, Whitney Houston loved the Lord.”

“‘If God be for you, who can be against you?’ So say whatever you want, God was for her, and she is resting, singing with the angels.”

Houston will be buried privately near her father, according to reports.

What did you think of Tyler Perry’s speech at Whitney Houston’s funeral?