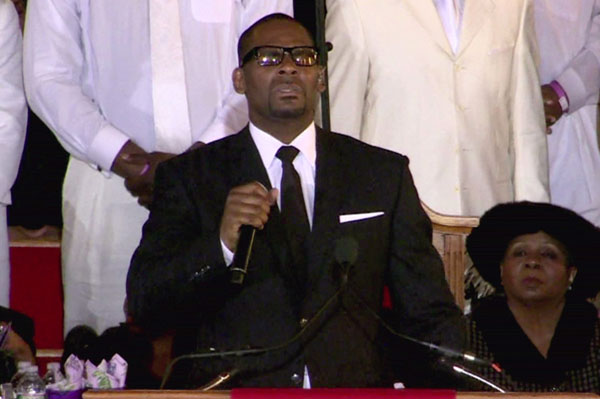 Aretha Franklin couldn’t make it to her goddaughter’s funeral to perform due to leg spasms.

“Regretfully, I am so sorry that I was unable to be with you at Whitney’s service today,” the soul singer said in a statement.

“I had every intention of being there. But unfortunately I had terrible leg spasms and locked leg muscles until 4:00 a.m. this morning following my concert last night, which I’ve been having for the last few days.”

Franklin was missing, but Wonder, Keys, CeCe Winans, BeBe Winans and Kelly did a good job of taking her place.

Singer Keys named Houston as one of her influences in music and thanked her with a stirring tribute.

“We called each other Meema,” Keys recalled. “She was such a beautiful, caring human being. She would call you for no reason at all but just to say hi. And that’s rare I think, sometimes.”

“I feel like in so many ways she reached back to me and to Michael and Brandy and Jordin [Sparks] and all these young artists and made us feel strong and capable and loved,” she continued. “I think she is an angel to us. She has been an angel to us.”

Wonder managed to make the mournful crowd smile with his memories of Houston.

“In my fantasy world I had a crush on Whitney,” he joked. “I understand that ‘Ribbons in the Sky’ is one of the ones that she liked a lot.”

The attendees gave him a standing ovation before he launched into his song, “Love’s In Need Of Love Today,” with the assistance of the church choir.

R. Kelly sings “I Look to You”

Singer R. Kelly gave the most emotional performance of the memorial. The R&B singer struggled through a performance of the song he wrote for Houston’s 2009 album, “I Look To You.” His voice was strong, but broke with emotion in several parts.

What was the most memorable part of Whitney Houston’s funeral?