Whitney Houston’s funeral was missing one prominent person in her life: Bobby Brown. Find out why he came to the funeral and promptly left. 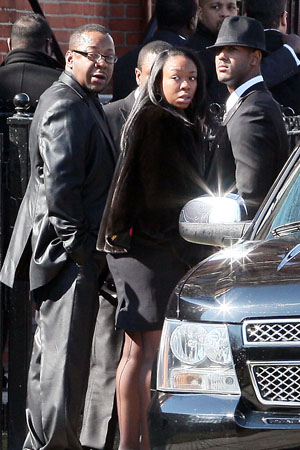 Bobby Brown didn’t make it into Whitney Houston’s funeral after all. The ex-husband of the singer reportedly left the New Hope Baptist Church in Newark, New Jersey when his nine-person entourage was blocked from attending the invitation-only service.

“Bobby was outside the church,” a source told People. “He hugged his brother and then got in a car, and they drove him off.”

Early reports indicated that Brown was blocked from attending the funeral, but later reports from inside the church indicated otherwise.

“Bobby Brown went inside the church,” CNN Headline News tweeted. “He walked by Whitney’s casket and then came back up the aisle. His eyes were red, and his head was down.”

Rumors emerged in the days after Houston’s death that her family planned to ban the father of Bobbi Kristina Brown from the funeral. The couple had a tumultuous relationship that ended with a divorce in 2007.

However, the New Edition singer was invited and wanted to be there for his devastated daughter.

“She wanted her dad to be there for her mom,” the relative says. “She is not going to be happy that he was turned back,” a source told People. According to singer Mike Bivins, Brown’s other children, Landon and LaPrincia, traveled 12 hours by bus to attend the service of their ex-stepmother.

One of the funeral guests, Rev. Al Sharpton, tweeted that the situation was blown out of proportion.

“I am at Whitney’s funeral. I spoke with Bobby Brown trying to calm him down and not distract from the services. Today is about Whitney!” he tweeted, later adding a clarification.

“We are out of the service. I don’t want anyone distorting Bobby Brown. He has shown love and respect today. Stop hatin’.”

Houston’s ex later issued his own statement on the situation.

“My children and I were invited to the funeral of my ex-wife Whitney Houston. We were seated by security and then subsequently asked to move on three separate occasions,” he wrote.

“I fail to understand why security treated my family this way and continue to ask us and no one else to move. Security then prevented me from attempting to see my daughter Bobbi Kristina. In light of the events, I gave a kiss to the casket of my ex-wife and departed as I refused to create a scene. My children are completely distraught over the events. This was a day to honor Whitney. I doubt Whitney would have wanted this to occur. I will continue to pay my respects to my ex-wife the best way I know how.”

Brown is scheduled to perform with New Edition on Saturday night at the Mohegan Sun Casino in Connecticut.