The cover of the new edition of the National Enquirer features a fake Whitney Houston death photo. The tabloid reportedly hired an actress to pose as the departed singer in a series of sensational snaps featured on the pages of the glossy. 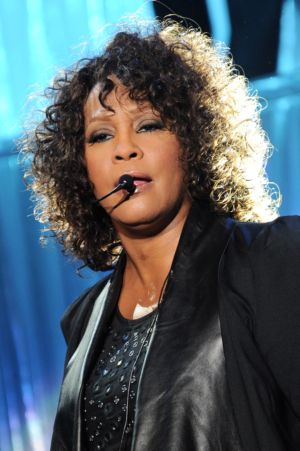 The National Enquirer is causing shockwaves.

So what else is new?

The tabloid glossy, famous for blurring the line between entertainment and ethics, is in hot water with critics after publishing a 10-page Whitney Houston exclusive. In it, the mag dissects what “really happened” in the hours before the singer was found dead in a bathtub at the Beverly Hilton Hotel on the eve of last Sunday’s Grammy Awards.

Naturally, the piece couldn’t go to print until Enquirer editors actually hired an actress to pose as Whitney’s corpse. Yep, the tab reenacted Houston’s death scene for a set of controversial snaps.

Between the covers of the new issue of the Enquirer a model is photographed lying face down on a bathroom floor, seemingly in character as the late legendary songstress. The front page advertises “Exclusive Crime Scene Photos,” but closer examination reveals a tiny disclaimer admitting to “photo re-creation.”

The Enquirer — which nearly won a Pulitzer Prize for its coverage of the John Edwards sex scandal — isn’t commenting on the criticism surrounding its latest “photo re-creation.” Instead, the paper is setting its sights on cashing in on Houston’s death.

The publication that wrongly diagnosed the star with emphysema and published a flurry of reports about her troubled marriage to Bobby Brown has inked a deal to produce a documentary about the late pop idol, Indie Wire said this week. The still-untitled project,  co-produced by the U.K.-based company Zig Zag, will focus mostly on urban legends about Houston’s history with drugs and her sometimes-turbulent family life.

“Whitney’s death sees the end of one of the greatest talents of our time… We want to tell her true story and our partnership with The National Enquirer will enable us to do just that,” said Leila Monks, an executive with Zig Zag Productions.

This isn’t the first time a dead celebrity has caused a PR nightmare for the already controversial publication. In 2007, Enquirer ran a photo of Anna Nicole Smith‘s dead body under the headline “Anna Nicole: The Last Photo!”

“If you had our images side-by-side with the actual photos, I don’t know if you’d be able to tell them apart,” the mag’s editor-in-chief David Perel said at the time.

Enquirer suits originally claimed to have created the snap after listening to witness accounts of the Playboy Playmate’s death. The publication later confessed that the “Anna Nicole Death Pic” was authentic.