Is love in the air again for former Gossip Girl couple Ed Westwick and Jessica Szohr? In the past week, the exes have allegedly been spotted getting lovey-dovey over at least two brunch dates. 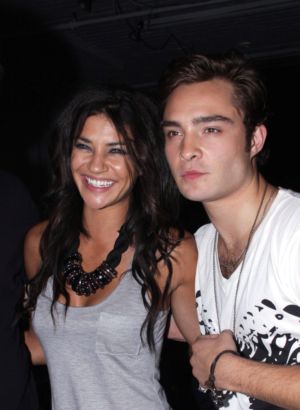 They may not have been much of a match on Gossip Girl, but Ed Westwick and Jessica Szohr sure know how to heat things up when the cameras aren’t rolling.

The former co-stars and exes have reignited their flame, according a new report in Life & Style magazine. Spywitnesses have allegedly spotted the pair breaking bread and serving up public displays of affection all over the Big Apple.

In fact, we hear the pair couldn’t keep their hands off each other during a pre-Valentine’s brunch in Brooklyn last week.

“They were eating brunch at Allswell restaurant in Brooklyn on Feb. 11,” a squeal gushed to the glossy. “They were seated in a corner table by the window and were kissing and making out!”

And that isn’t all.

“I saw Ed and Jessica eating brunch at Cafe Colette in Brooklyn,” a second snoop gushed. “They were all over each other!”

The pair began dating in 2009. They split after a two-year romance, amid reports that Jessica was unfaithful throughout much of the union.

While Ed was in Germany filming the cinema drama Chalet Girl, Jessica was said to be keeping busy with a bevy of secret bed buddies. One of her alleged suitors was also Ed’s friend.

“Ed discovered that not only was Jessica seeing a close friend of his — he was told about it personally, by the guy. But that she was also seeing a few other men,” a source snitched to The New York Daily News last year.

“When Ed wasn’t out with her for the night, she’d flirt heavily with guys. It was only a matter of time before it got back to Ed. He wants nothing to do with her…”

Jessica — who left the cast of Gossip Girl in 2011 — denied all allegations branding her a trashy trollop and pinned her hopes on salvaging the relationship.

It sounds like her groveling may have resulted in a kissy reunion — and at least two free brunches.

Would you like to see Jessica and Ed get back together?