This just in: Janet Jackson is being courted for a judging role on Fox’s The X Factor. Can the shy singing star make an impact as a talent show pundit? 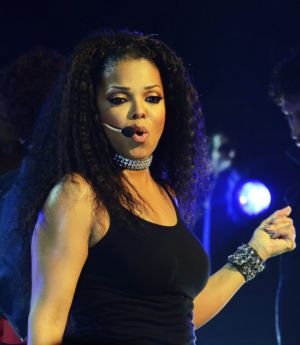 Oops! Janet Jackson has seemingly let it slip that she may be set to join Simon Cowell and L.A. Reid as a judge on The X Factor USA.

Janet, 45, was chatting with Anderson during a taping for Monday’s edition of his eponymous daytime gabfest when she found herself on the hot seat about her involvement with the ratings-challenged talent show. The “Anytime, Anyplace” hit-maker stammered and appeared at a loss for words when the gray-haired host asked her if she’d be joining the all-new X Factor panel.

“No, I am not a judge on The X Factor,” she nervously replied.

“So you’re not currently a judge on The X Factor?” Anderson, 44, probed, which only seemed to make Janet even more uncomfortable.

Janet has good reason to keep quiet. Tinseltown tattles tell The Hollywood Reporter that the woman who introduced Americans to the phrase “wardrobe malfunction” is in preliminary talks to join the second season of the Fox singing competition as a mentor.

There are presently two vacant judges’ seats on the Fox series following the exits of Paula Abdul and Nicole Scherzinger. Both singers were axed from the series last month. Welshman presenter host Steve Jones was “gutted” to learn that he was also being let go after failing to connect with the American audience.

Cowell, X Factor’s executive producer, has reportedly been holding meetings with potential replacements for the ousted cast members all week. While Janet is in discussions with producers, Simon has his heart set on signing punk pop princess, and L.A. Reid’s one-time protégé, Pink, according to those in-the-know.

“The singer, whose real name is Alecia Moore, has credibility, Grammy awards and sass, plus ‘she can take on Simon,'” The Reporter writes.

Fergie, Katy Perry and Mariah Carey are some of the other names being tossed around as potential X Factor mentors.

Think Janet’s got the chops to cut it on reality TV?