Whitney Houston’s songs and albums have impacted the musical charts in a big way in the week since the songstress was found dead in a Beverly Hills hotel room. 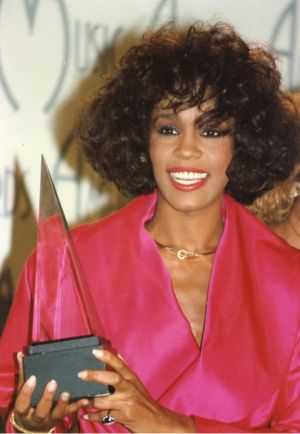 Whitney Houston‘s music has topped several sales charts in the days since the music legend was found dead in a Beverly Hills hotel room on Feb. 11.

Houston’s albums dominated Amazon’s bestsellers chart this week, with the two-disc Whitney Houston: The Greatest Hits landing in the number one spot. Seven other Houston-related albums — including the soundtracks to her films The Bodyguard and Waiting to Exhale — charted in the Top 10. The Greatest Hits also topped Amazon’s MP3 sales chart and several of Houston’s other releases filled the digital Top 40.

Houston’s death boosted her sales on iTunes, as well. Eight of the star’s albums are currently listed on the Top 100 album sales chart, with The Greatest Hits once again taking the number one slot. The original and deluxe versions of her self-titled 1985 debut also charted.

More than 101,000 Houston albums have been purchased this week. That’s more than the total sales for Whitney’s 2009 comeback album, I Look to You.

And some say the recording industry is wasting no time raking in the cash register receipts. Bosses at Sony Music outraged fans this week after the company raised the price of Whitney’s albums mere hours after her death.

Whitney’s The Ultimate Collection jumped in price from $7.85 to about $12.50. The price for The Greatest Hits rose from $12.50 to $15.67 on Sunday. The price changes were a decision made by the record label and reversed after thousands of observant listeners went on the warpath.

Sony insists it wasn’t trying to capitalize on Houston’s death. The label has since apologized for the “mistake.”

“[A] Whitney Houston product was mistakenly mispriced on the U.K. iTunes store on Sunday. When discovered, the mistake was immediately corrected. We apologize for any offense caused,” Sony said in a statement this week.

A return of Houston’s songs to the charts was almost certain, music analysts say. After all, the deaths of artists Michael Jackson and Amy Winehouse, in 2009 and 2011 respectively, sent their record sales soaring. But according to Forbes magazine, which publishes the annual list of the world’s “Top-Earning Dead Musicians,” Houston’s estate may not bring in the same money because the singer doesn’t have writing credits for her songs.

The pop powerhouse started out as a teen model before making a dazzling segue into music. With a ferociously powerful voice, Houston dominated the music scene in the 1980s and 1990s as a pop-soul trailblazer.

Whitney, 48,  sold more than 170 million albums and singles worldwide over the course of her career. She spawned a string of chart-topping hits, including “So Emotional” and “I Have Nothing.”