Samuel L. Jackson just isn’t that into “the issues.” You know, like the fixing the economy, lowering taxes and improving public schools. The Snakes on a Plane star says President Barack Obama’s race was more pivotal in attracting his vote than any of his campaign promises. 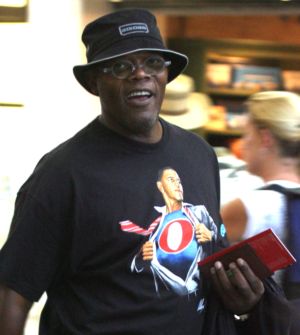 Samuel L. Jackson sure seems to think so.

The Go the F**k to Sleep star is very candid about why Barack Obama got his vote in the 2008 presidential election. Eh — let’s just say it has nothing to do with Mr. O’s foreign policy or the fact that they both listen to Al Green.

In an interview with the March issue of Ebony magazine, Jackson admits that he was very intrigued at the thought of a man of color being in power over at the Oval Office.

That’s right, he said it.

“I voted for Barack because he was black. ‘Cuz that’s why other folks vote for other people — because they look like them,” Jackson told the urban interest magazine.

“That’s American politics, pure and simple,” he added. “[Obama’s] message didn’t mean s**t to me. In the end, he’s a politician. I just hoped he would do some of what he said he was gonna do. I know politicians say s**t; they lie. ‘Cuz they want to get elected.”

Of course, Sam sometimes wishes that the Commander-in-Chief weren’t so darn diplomatic.

He used some rather — um — colorful language to say as much.

“A n***a is scary. Obama ain’t scary at all. N****s don’t have beers at the White House. N****s don’t let some white dude, while you in the middle of a speech, call [him] a liar. A n***a would have stopped the meeting right there and said, ‘Who the f**k said that?’ I hope Obama gets scary in the next four years, ‘cuz he ain’t gotta worry about getting re-elected.”