Ryan Kwanten is double-dipping on dating and manners. We hear the True Blood heartthrob had a most enjoyable Valentine’s Day dinner! 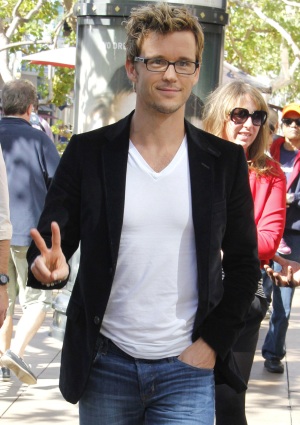 Valentine’s Day 2012 was doubly sweet for True Blood hottie Ryan Kwanten. The Australian actor spent Tuesday evening dining not only with a date, but a pair of friends as well.

The 35-year-old, known as not-so-smart but smoking hot Jason Stackhouse to True Blood fans, was reportedly joined by a blonde Australian mystery girl and another couple. We’re told the foursome sat at a booth with the two ladies on the inside and sipped tequila during the evening.

As if sharing the evening wasn’t enough, Ryan Kwanten, mystery date and their booth buddies even shared dessert! The group enjoyed a leisurely meal that lasted over three hours at Bagatelle, which just opened its doors Monday.

We’re happy to report that Ryan Kwanten went out of his way to show thanks for the food and service received at Bagatelle, even returning to the restaurant after leaving to thank his server one more time.

True Blood: Christopher Meloni on his way to Bon Temps >>

Ryan Kwanten will be seen next in the film 7500, expected to be released in August. It’s out with the fangs and in with up-in-the-air terror in a flick that follows a group of passengers who encounter what appears to be a supernatural force while on a transpacific flight.

7500 co-stars Jerry Ferrara and Jamie Chung nearly bumped into Kwanten on his Valentine’s Day date, as the pair dined at Bagatelle just the night before!

How about a round of applause for Ryan Kwanten’s double dose of dining manners?