The Vampire Diaries sure knows how to leave us hanging. Why do they always deliver the most shocking episodes only to go on a break? Read on to see what Elena thought of Damon’s latest indiscretion and if she actually made it through the episode in one piece. 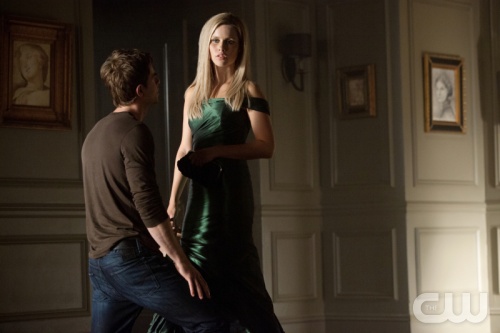 Esther linked her children as one last week, but did she get away with her plan on this week’s new episode of The Vampire Diaries, “All My Children?”

A lot happened during “All My Children,” so we took the vampy liberty of pulling out what you need to know, so you can salivate while the show goes on a small break.

Side note, Elena was not happy about Damon’s romp with Rebekah — yuck!

Elijah’s not dumb. He knew Elena was keeping something from him and, being the guilty kind, Elena came clean about Esther’s plan to kill all the children and end the abomination she created.

Not so smart. He took her underground where her nightmare was just beginning — say hello to Rebekah.

The plan? Rebekah was to hold Elena hostage, while Elijah bargained with Damon — kill one, or both, of the Bennett witches (their bloodline is needed) so the spell won’t work or Elena dies.

Eventually the spell started working, but not before the rest of the kids start putting the pieces of the puzzle together. While at the bar, Alaric daggered Kol after he hit on Meredith and all the Originals, but Klaus went down.

Klaus realized what was going on and helped out his brother.

Five triangles we’d love to be in >>

Kol, Elijah and Klaus found Esther who sent Bonnie and Abby away. Their big family altercation came to a halt when Damon lived up to his end of the bargain.

He disposed of Abby Bennett to weaken the spell, but he did it in the worst way possible — he turned her into a vampire!

Elena was released, but Bonnie wanted nothing to do with her thanks to Elena’s part in turning her mom into a vampire.

During the altercation with Kol, Alaric was injured and taken back to Meredith’s to rest.

While at Meredith’s, he found the weapon used in the recent killings! Is there ever going to be a moment of peace for this man? She shot him!

It also turns out there’s another white oak tree out there that can help kill the Originals. Uh-oh! Perhaps the Originals will be turned human? Interesting thought.