Sin City played host to the next round of American Idol, where music of the ’50s and ’60s ruled supreme. 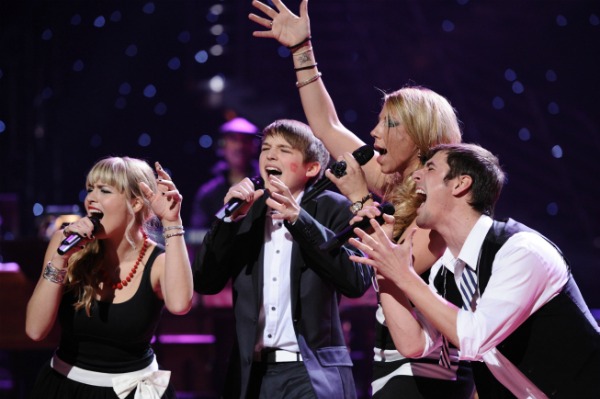 The Idol hopefuls hit the Vegas stage this week, taking on the killer tunes of the ’50s and ’60s.

Unfortunately for the contestants, they weren’t flying solo. They had to form groups of three or four — if you sucked, you were cut on the spot. If you rocked, you moved forward to the next round — sort of.

Many of the groups rocked out their performances like true professionals, but there’s always a twist.

Nigel Lythgoe on The Voice >>

The judges gave a standing ovation to Reed Grimm, Haley Johnson, Eben Franckewitz and Elise Testone thanks to their funky beat box surprise.

Check out what went down during the Hollywood round >>

Other notable names that stood out were Colton Dixon, Skylar Laine and Chase Likens, but here’s the kicker…

Just because you pulled it out with your group didn’t mean you were safe. Over the course of the two-day auditions, if the judges changed their minds, they could still send you home at the end of the Vegas stay — based on seeing others throughout day two.

Despite pulling out killer performances, we said goodbye to Gabi Carrubba, Angie Zeiderman, Johnny Keyser, Britnee Kellogg, Schyler Dixon and a number of other hopefuls.

Did you check out this week’s American Idol Vegas round?

Is your favorite still in the game?