After undergoing throat surgery last October, John Mayer finally sings like his old self again and releases a teaser of an upcoming single, “Shadow Days.” 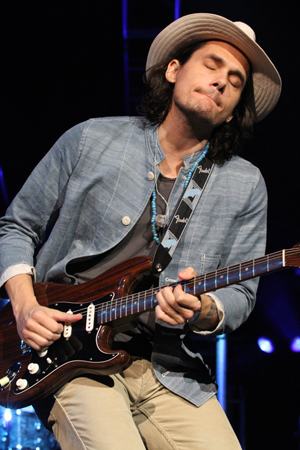 It’s been a celebratory week for music… Celebrities have come together to honor the late Whitney Houston, Adele made her return to the stage at the Grammy Awards this past Sunday, and earlier today, singer-songwriter John Mayer posted an update on his post-surgical musical state, complete with a clip of an upcoming single.

“Here’s a clip of the first single off Born and Raised, called ‘Shadow Days,'” he said on his Tumblr blog. “I’m excited to share the first bit of sound from the album… Been looking forward to a post like this since Oct.14, 2010, the first day I started writing this group of songs. Enjoy.”

The song, entitled “Shadow Days,” sounds like an optimistic reflection after a breakup and rings true to Mayer’s signature sound — which is great news, since he was diagnosed with granuloma and underwent extensive surgery on his vocal cord.

“I never thought I’d be wishing I could do what I love again; I stay in at night, picking guitar parts off of records and dreaming of playing on the big stage,” he shared last October, just two weeks after the surgery. “The only difference between now and when I was 18 is that now I have this beautiful, meaningful record waiting for me when I can sing it.”

Mayer’s upcoming album, Born and Raised, was originally scheduled for an October 2011 release. No word yet on a pending release date, but judging from the clip he posted, it sure sounds good so far. Below are lyrics to the chorus of the teased single:

Listen to the full clip of “Shadow Days” here, and tell us what you think of the song in the comments below!

Glad to have you back, John Mayer.

Lil’ Kim gets real: Nicki Minaj is a stupid ho
Adele’s next album: No more “bitter witch”
Selena Gomez done with The Scene